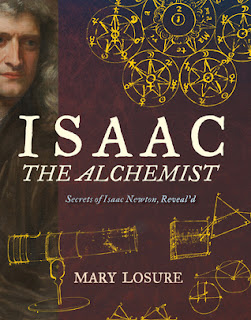 Isaac Newton is one of the most important scientists that ever lived. His ability to think outside the box of the traditional thinking of his day led to what is now called the Age of Reason. His laws gave order to the universe, explained by mathematical formulas that he unlocked. Isaac's laws would one day make it possible for us to predict the path of satellites and how much rocket power it would take to get to the moon. He correctly predicted that the force of gravity would diminish as an object got further from Earth. His laws have laid the framework for the physics of today. But before Isaac Newton put his thoughts down in a remarkable book named Mathematical Principles of Natural Philosophy, he was just a kid who enjoyed nothing more than thinking deep thoughts and recording them in big or little notebooks. A lot of his scribbling had nothing to do with science but a lot to do with alchemy.

As a boy Isaac Newton was sent to live with another family and the father of that household was an apothecary who allowed Issac to read his books and to assist with his experiments. Surprisingly, the man we think of as a father of science was actually more interested in magic in the beginning. As he grew into an introverted young man, eventually ending up at Trinity College in Cambridge, he read more and more about alchemy and he even started his own forge and conducted experiments hoping to discover the secrets which would allow him to make gold from lead and to discover the philosopher's stone. It is shocking that he lived to a ripe old age of 84 before he died since many of his experiments involved mercury, which we know today is highly poisonous.

Isaac the Alchemist: Secrets of Isaac Newton, Reveal'd by Mary Losure is more about alchemy than about science. It is about Isaac Newton as he develops into the famous man who brought order to our thinking about the universe. It is about the deep thinker who wrote things down in shorthand so that years later his scribblings could be discovered for what they were---often they were not fantastic formulas but just lists of sins he wanted to get off his chest.

This book, written for young teens, is a perfect introduction to Isaac Newton. It is filled with illustrations found in old books available during Newton's lifetime (1643-1727) and it shows pages from Newton's own notebooks, though the marks' meanings are not identifiable. The paragraphs are short, as are the chapters and it is very readable. We learn about Isaac's odd education and come to understand that the way he isolated himself from others allowed him to sit and think about the universe. It was during one year when the bubonic plague caused his school, Cambridge, to close down, that Newton sat at home and pondered mathematics coming up finally with what he called fluxion, but we know today as calculus. That year, 1666, is now called the Year of Wonders, because that was when Newton discovered so many things: optics (prisms), gravitation, calculus, and motion.

John Maynard Keynes, who was a famous economist, bought some of Newton's papers in 1936 and he was surprised to learn that many of them had to do with magic, not science. He famously said that Newton was "not the first of the age of reason, but the last of the magicians." If this is true, then Losure contends that


this magician, this last sorcerer---the greatest of all alchemists---was the same man who banished magic from the scientific world. The alchemist is someone [afterall] who transforms one thing into another. And this, Isaac had done (127).

I liked this book so much. The format, the illustrations, the writing all come together to create a book which is very accessible for teen readers but holds great interest for readers of all ages. I recommend it highly.

Posted by Anne@HeadFullofBooks at 8:59 AM