The Whydah: A Pirate Ship Feared, Wrecked, and Found 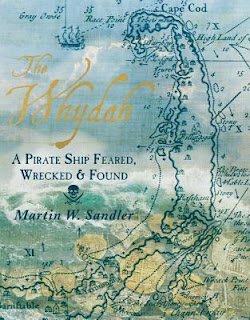 I am having so much fun a a Cybils Award, Round 1 judge. I have read over twenty books so far in this capacity and have learned so much along the way.

This book, The Whydah: A Pirate Ship Feared, Wrecked, and Found by Martin Sandler is one that provided me with tons of new knowledge. This book, aimed at young teens, is enlightening on many levels.

During the years of 1650 to 1730 piracy was a big problem on the seas. Everything of any weight or volume had to be transported by water which included gold and gems. It didn't take long before unscrupulous men realized that there was a treasure to be got with fairly easy pickings.  We think of pirates taking their treasures and burying them on some island in the Caribbean, thanks to books and movies we read/watched in childhood. And because of these we also have an idealized idea about pirates as handsome and daring or as a drunk with a parrot. This book about the Whydah sets the record straight.

The Whydah was a slaving ship which would travel on the Trading Triangle (West Africa, Caribbean, England) in the early 1700s. After it had disgorged its despicable cargo of human beings in the Caribbean, and was loaded with money and goods it was commandeered by Black Sam Bellamy. Bellamy was the greediest pirate who ever sailed the open seas. He not only took treasures but encouraged crew members from the ships he commandeered to join him and would often take the ships themselves, always looking for bigger, faster vessels.

In 1717 loaded down with treasure the Whydah and the other ships in its flotilla were heading up the Eastern Seaboard toward Maine when they got caught in a Nor'Easter off Cape Cod. The Whydah sunk and Bellamy drowned. For almost three hundred years people have been looking for the wreck, knowing it was laden with treasures. Then in 1984 some marine archaeologists found it and have been bringing up items from the Whydah ever since then...enough to fill a whole museum. Along with the items they have been discovering aspects of piracy unknown to historians until now. It is fascinating what they have discovered from the wreckage.

This book is a treasure in its self. It is perfect for the young teen boy or girl who likes to read about real life adventures or who is obsessed with pirates. But it is also fascinating for anyone, adults included, who likes to read to find out new information about topics which they thought they already knew plenty.

Since I read The Whydah as part of my quest to discover an award book, I should spend a minute talking about the author. Martin Sandler is an award-winning author for a YA history series, he has been nominated for a Pulitzer Prize twice, and has won five Emmy awards for his writings for television. This guy can write! As I was reading The Whydah: A Pirate Ship Feared, Wrecked, and Found I turned to my husband and exclaimed, "Finally, a well-written YA nonfiction books. Just what I've been looking for."

So I guess you can tell that I like this one and highly recommend it for you and your family.  And if you live in or are traveling in Massachusetts, stop at the Whydah Pirate Museum in Cape Cod and see for yourself the treasures from the Whydah, the only pirate wreck ever found and recovered. I know I will visit it myself if I am ever in that part of the country.