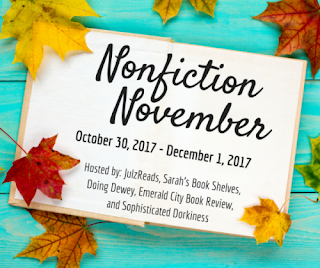 Week 2: (Nov. 6 to 10) — Sarah @ Sarah’s Book Shelves — Book Pairing: This week, pair up a nonfiction book with a fiction title. It can be a “If you loved this book, read this!” or just two titles that you think would go well together. Maybe it’s a historical novel and you’d like to get the real history by reading a nonfiction version of the story.

I love this topic. I think that it is important to teach students that they CAN learn things from reading both fiction and nonfiction. Why not offer them options to expand their knowledge? Hey, this is true for all people, not just students.  So with this in mind here are a few nonfiction/fiction pairs I think would be marvelous together.

On the Great American Dust Bowl:

On Khmer Rouge Victims in Cambodia:

On the Indigenous Peoples' experience:
paired with

On space travel:
paired with

In Our Backyard: Human Trafficking in America and What We Can Do to Stop It by Nita Belles. Prostitution, Child Labor, Slavery. Believe it or not it is still happening. But we can stop it.

Dime by E.R. Frank. A fictional account of a young girl who gets lured into prostitution. It ends of a hopeful note.

On Defying Hitler:
paired with

On Black Lives Matter:
paired with

On Living With Mental Illness:
paired with

I could go on.
I will stop.
What are some good fiction/nonfiction pairings that you can recommend to me?