The One-In-a-Million Boy by Monica Wood 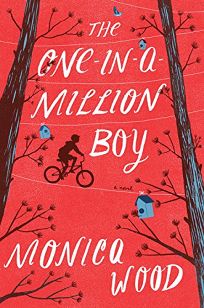 Some characters just reach out and grab you and refuse to let go. That is the case of the 11-year-old unnamed boy in The One-In-a-Million Boy by Monica Wood. "The boy", as he is known throughout the novel, is a friendless, idiosyncratic kid who loves to make lists from the Guinness Book of World Records. He is assigned to work on a Boy Scout badge by helping Ona Vitkus, a 104-year old woman who still lives alone. In addition to filling her bird-feeders, the boy interviews Ona about her life. In a series of ten sessions Ona reveals aspects of her long life, which started in Lithuania. She also agrees with the boy that becoming the oldest living person with a driver's licence would be a good goal to get into the world record book. On Saturday the boy does not show up for his duties. The next week his father, Quinn, shows up instead and shares that the boy died suddenly from a rare condition where the first symptoms are usually death.

Quinn, an itinerant musician, didn't know his son well and is racked with guilt about not being around for his son. When he volunteers to fulfills the requirements for the boy's badge, Quinn has no idea that both he and his x-wife would get sucked into the dream of earning a world record and helping Ona earn a spot in it.

The novel is not laid out in chronological order. Through the ten-part series of interviews we meet and get to know Ona Vitkus and a bit more about the boy. As Quinn starts to work with and befriend Ona, we learn about his back story and about his relationship with his son and his x-wife. Throughout the story we come to love all four of the flawed characters, but for me if was the boy who stole the show.  He clearly had a passion and in his short 11-year life he was able to bring people together and healing to all of their relationships. His end is just about the sweetest ending I have ever read in literature, one filled with love and intense insight.

Yesterday I blogged about book endings and how frustrating it is when a book ends on a sour note or is in some way unsatisfying. That is not the case with The One-In-a-Million Boy. This book ends on a very satisfying note. I am sure I sighed as it ended.

This is a book club selection for next month. I look forward to our discussion. I bet we will spend a bit of time trying to figure out why the author did not name the boy.

I listened to the audiobook read expertly by Chris Ciulla. I say this because I have come to realize that often books I love in the audio format are very different in the print version. I can recommend this version without a moment of hesitation.

Posted by Anne@HeadFullofBooks at 11:25 AM