Review: The Gentleman's Guide to Vice and Virtue by Mackenzi Lee 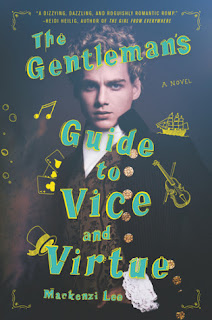 In the beginning of The Gentleman's Guide to Vice and Virtue, eighteen-year-old Henry "Monty" Montague is preparing for a grand tour of the continent before returning to Britain and his birthright as a lord. He will be traveling with his best friend and secret crush, Percy, and his younger sister, Felicity. Monty looks at this trip as his last hurrah. Nothing about the life of a lord is attractive to him, especially since it will mean separation from Percy.

Not long into the trip things go all crazy after Monty, who is very drunk, ends up in a very compromising position during a party at Versailles where he steals a trinket, which is actually a highly sought after key to a special type of curative alchemical treatment. At this point the planned grand tour devolves into a run and hide and seek endeavor to get away from their pursuers and to find the answers contained within the trinket box. Along the way the trio end up meeting some Spanish siblings, whose father concocted the special chemical being sought by everyone. As they escape again they end up at the mercy of some very inexperienced pirates. The whole book had a feel of a swashbuckling adventure set in the 1700s.

But below the surface of all the fun and excitement were much more serious topics of sexuality, love, feminism, racism, abuse, disease, and even alcoholism. Monty could be arrested for his bi-sexuality and he often drinks himself into oblivion to help disguise his feelings; Percy, who is half black,  has to deal with racism on a daily basis but is also plagued by the misunderstood condition of epilepsy; and Felicity wants to be a doctor but women of the day are not encouraged to have careers or even use their brains.  There are a lot of stories underneath the story.

The magical thing about The Gentleman's Guide to Vice and Virtue by Mackenzi Lee is even though the book is crammed full of very serious topics, it is extremely fun to read and often very funny. It strikes the right tone, serious topics with a light hand. The book, a tome weighing in at over 500 pages, reads very fast and is designed to keep the reader engaged from the first page to the past. Set in the 1700s it doesn't really come across as historical fiction, except for the existence of pirates and the court still in existence in France.

Today's teens will find a lot to like in this YA novel which has received quite a few starred reviews from reviewing publications. Here are a few of the comments they've published about the book:

✩ "Austen, Wilde, and Indiana Jones converge in this deliciously anachronistic bonbon".-Kirkus Reviews
✩ "...the romantic relationship that develops between Monty and Percy is sure to leave readers happily starry-eyed. -Publisher's Weekly
✩ "This is a witty, romantic, and exceedingly smart look at discovering one’s place in the world." School Library Journal

I happily gave this book ✩✩✩✩✩

Because of it's length, it qualified for The Big Book Summer Challenge, hosted by Sue@ Book by Book. 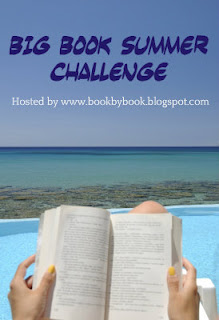 Posted by Anne@HeadFullofBooks at 12:12 PM