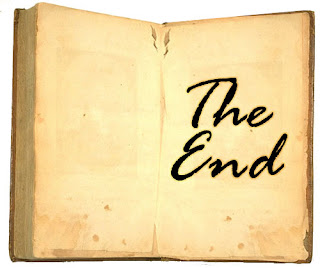 This past week I finished a short novel which, to put it mildly, had a very unsatisfying ending. It ended on a very sad note, not death-sad but despair-sad. Up to that point my husband would have graded the book with a 3.5 to 4 star review, but with the ending he gave it just two stars. Later he upgraded it to 2.5 stars, but only because I pushed. Wow, who knew that an ending could have such a profound impact on how much a person liked/disliked a book? This got me thinking about book endings. What is it that makes an ending a good one?

In an article entitled "Everything You Need to Know About Writing Endings", NY Book Editors say there are six types of endings:


But what about the sad, despair-ending novel I just finished? It doesn't seem to fit into any of these ending types. I had to dig further to find another article on the Internet and found, "9 Key Elements of Great Endings" by Writer's Relief. I won't list all nine elements but one of them seems a little different than the six I listed above---Leave Room for Interpretation. Now that fits more closely with the ending I just experienced. The characters are unhappy but does that mean they will be permanently unhappy or can I create an alternative ending for them in the future where they do experience some happiness? These are the types of endings which I often causes me to under appreciate the book at its conclusion but end up causing me to think about the book long after I finished reading it.

We may talk an awful lot about book beginnings but I am suddenly aware that it is really book endings which make for our favorites and the most enduring books. If you don't believe me, pick up a classic and check out its ending. Here are a few of my favorites:
So, what do you think? How important is the ending of the book to how much you like it? What are some of your favorite book endings?

Posted by Anne@HeadFullofBooks at 6:28 PM