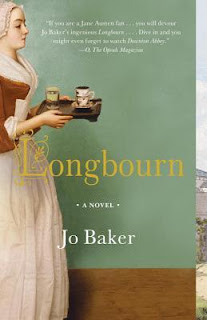 Diane Johnson, writing for the NY Times Review of Books, aptly titled her review of Longbourn by Jo Baker, "Pride, Prejudice and Drudgery." Unlike the many, many books written as continuations of Pride and Prejudice, Longbourn is the story of the servants of the Bennet family residing at thier ancestral home called Longbourn. Therefore, it in not a continuation of a favorite story but a filling in of the details. The outline of the original frames this tale but the details are about the drudgery of lives of the servants who serve the upper and middle class of the day.

Sarah, mentioned only briefly in Pride and Prejudice, is a housemaid and the majority of Longbourn is told from her point of view. In addition there are Mr. and Mrs. Hill, the housekeeper and cook and her husband who, though elderly, handles the horses and the wine cellar. Polly, a young servant of only twelve or so, is an orphan whose life as a servant is considerably better than the alternative, is a housemaid in training. James Smith, is hired as a footman but has a back story which unfolds like a mystery. He appears after several chapters and disappears around midpoint of the story, adding more mystery to his story.

Yet, like the servants in the popular TV series, "Downton Abbey", the servants of Longbourn have a life of their own. They have dreams and plans. They fall in love, and have crushes. They get sick. They feel lonely. They become victims of gossip, so must always live their lives with scrupulous attention to decorum, so as not to shame their employers.

Lest you think the book sound tedious, all about dusting, and washing out rags, fetching water, and rubbing down horses, it really is a wonderful story. Jo Baker obviously did her homework so the book reads as a nice companion to Austen's work. Baker includes details in her work lending to its credibility and takes characters we already know and love and twists their story around a bit for interest. For example, Margaret Hill (Mrs. Hill) and Mr. Bennet had a fling before he married Mrs. Bennet and started a family; Mr. Bennet wasn't nearly as kind and thoughtful as in the original and Mrs. Bennet was a bit more sympathetic; Mr. Wickham is even more dastardly than in the original book; and Lydia has a sweet side and a sweet tooth. Mr. Darcy barely shows up and Mr. Collins isn't nearly such a bumbling fool. Jane and Elizabeth are still kind but also oblivious to the needs and desires of the servants. In one exchange, Sarah asked Elizabeth if she knew anything about the disappearance of Mr. Smith. Elizabeth looks at Sarah blankly before exclaiming, "Oh you mean Smith, the footman. When you called him Mr. Smith I thought you meant someone of my acquaintance, a gentleman."

Austen, who was raised in an upper, middle class family like the Bennets probably was just as oblivious to the servants as was Elizabeth. She didn't mean to be snobby, it just was a condition of the time.

The real interest in the book for me were the stories and characters that were not in Pride and Prejudice, or were only briefly mentioned---slavery, the Napoleon War, and life outside of servitude. New characters were added to tell these stories and they added a fullness and richness I wasn't expecting.

As I finished up Longbourn and added it to my 'completed books' list at Goodreads, I happened to notice all the poor reviews for it at that site. It seemed like all the reviews were variations on the same thing---"OMG. Longbourn isn't Pride and Prejudice and Baker isn't Austen, so I couldn't stand it." I was shocked at the shallowness of the reviews. Of course it isn't Austen, but Longbourn does a great service to the original, it fills out the story and gives us insights into life for everyone during the Regency period. I, for one, liked and appreciated the book a lot.

As a devoted Janite, I am glad I read it. But I didn't just do it for myself, I also read the book to fulfill my commitment to read a Jane Austen-related book this month in the Austen in August Challenge and it is an upcoming book club selection. I wonder what the gals in my club will think of the book?

Have you read it? What do you think of it? Do you like to read Jane Austen retellings and/or continuations? I am a sucker for them but they always lead me back to the originals.

Posted by Anne@HeadFullofBooks at 11:37 AM