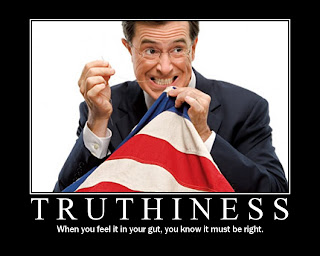 Can you believe this? The term "truthiness", coined by the comedian Stephen Colbert, has actually made it into dictionary.com. Here is the definition for truthiness:


truth·i·ness [troo-thee-nis]
noun
1. the quality of seeming to be true according to one's intuition, opinion, or perception without regard to logic, factual evidence, or the like: the growing trend of truthiness as opposed to truth.
2. informal (of a belief) the quality of being considered true because of what the believer wishes or feels regardless of the facts.

I suppose that we operate, to some degree, with a bit of "truthiness"...believing something to be true just because it feels like it should be true. But it is starting to be quite alarming what some people believe and what they base their beliefs on these days.

Is there no one standing up for actual facts and reason? Enter the trusty librarian. Mark Ray, the 2011 Washington State Teacher of the Year is a Teacher-Librarian in Skyview High School in Vancouver, Washington. He wrote an excellent editorial about the importance of librarians today with so much "truthiness" around to combat.  Here are a few of the highlights from the editorial but I urge you to pop over to the Seattle Times link and read the whole thing for yourself,
I'm with Mark Ray, I believe that we need more librarians to help students navigate the plethora of information out there so that less decisions are based on "truthiness" and more are based on facts!

If you are with me, thank a teacher-librarian you know today!

Posted by Anne@HeadFullofBooks at 3:18 PM