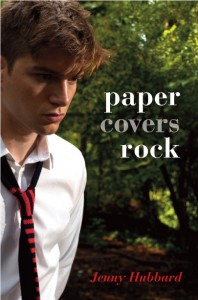 Moby Dick, the whale, could be a symbol of a ghost or phantom. And his white color could, therefore, represent innocence.  Surely a regular-colored whale would represent no such thing. Captain Ahab's relentless chase then might be a symbol of an attempt to regain innocence.

I'm certainly no Melville expert. I haven't even read Moby Dick yet I reveled in all the literary allusions in Paper Covers Rock by Jenny Hubbard to the great masterpiece of American literature. It is a coming-of-age story about Alex who experiences a loss of innocence after the death of Thomas, a friend and classmate. No matter what he does, he cannot go back and regain it.  Alex describes loss of innocence as "the knowledge that your brain, no matter how much you cajole it, can never make your heart pure." (73) Alex, in an attempt to purge his soul, attempts to write the not-so-great-American-novel (journal). In the process he "falls in love" with his English teacher as she helps him find his gift of writing and the music of poetry which seems to just pour out of him.

Rarely have I found a YA book so full of symbolism, poetry, and literary allusions. This book begs to be taught right along side its inspiration, Moby Dick. But that does not mean that it is dry or stuffy. I think, rather, it is meant to be chewed on and savored. Even the title of this book is perfect. Named for the childhood game ROCK-PAPER-SCISSORS it becomes clear that certain decisions trump others.

Here are some of my favorite quotes from the book which I think will give you for the a sense of the beauty of Hubbard's writing.  I hope you enjoy and savor them!


"After Thomas dies, everything seems outlined with electricity as if the school is at attention, poised for war. The boxwoods long the brick sidewalks appear taller, topped with a hundred little eyes. Even the lampposts look as if they are conspiring." -p.10
"In the days after Miss D-- read my poem in class, a whole new vista of knowledge spread out before me...I was learning how to float across the horizontal lines that I'd always thought were reasonable borders." -p. 29
"Writing is about making choices, Miss D-- says. One word or phrase or title over another. So many options that they're almost overwhelming. Which is why it is sometimes so easy to grab the cliché, to reach out to what is familiar. But don't."  -p. 72
"It is the time of day when the sun turns treetops into keepers of light.  After redoing my homework...I run through that light, up one side of the hill and down the other, imagining possiblities..."  -p. 93
"The brain is like a tree, and the tree has roots so deep that you have no idea what it is that grounds you." -p. 130
"Poetry is a language unto itself, where words carry more than their weight, where white space on the page is profound silence. Poetry is a way of seeing the world with your feelings." -p. 148
"I conjure Miss D--'s voice reciting my poems, the clip-clop of the lines carried her voice, her rocking voice, which is the rocking of the water, which is the rocking of my body as I lay me down to sleep."  -p. 161
"I want to pick up the words that have fallen out of her mouth and hide them away somewhere dark, somewhere deep." -p. 169
Hubbard, Jenny. Paper Covers Rock. New York: Delacorte, 2011. Print.

Posted by Anne@HeadFullofBooks at 10:28 AM