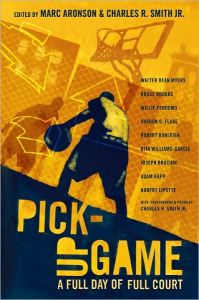 The Cage, a fenced-in basketball court on West 4th Street in NYC, is the setting for this collection of nine short stories by nine heavy hitters in YA lit. Imagine a summer day full of pick-up basketball game after game. Try to picture the characters who both come to play and those who came to watch. What mental images come to mind? I see sweaty guys and gals. I hear lots of smack-talk, the sounds of competition and teamwork. I picture girls who come to attract attention, photographers seeking shots, boys who have something to prove and those who just love to play the game. That is what is fun and real about this book, Pick-Up Game: a Full Day of Full Court, the way that each story comes alive in my mind.

The photography and poetry of Charles R. Smith serves to introduce and create a divider between each story. Characters in one story show up in the next with each successive story giving us a few more details of their lives. I spent a bit of time wondering how nine different authors pulled this off until I read somewhere that the first story was finished before the second was started.  In the Afterward Marc Aronson says, "When you walk out on a basketball court, you walk into a story: I win, you lose." This isn't just the story of the game itself, though, it is the stories that players bring with them to the game.

Admittedly, I am not the target audience for this book.  I am an old, non-basketball playing female who lives in suburbia in Washington State. Obviously kids who live and play in urban settings will be able to relate to these stories more than me. But I wonder if kids at my school will be able to relate to the stories from The Cage. My favorite story, "He's Gotta Have It" by Rita Williams-Garcia is about a kid who wants to get into the NYU film school and has decided to shoot a video about several characters playing games in The Cage. Another favorite, "Just Shane" by Adam Rapp, is about a runaway kid, Shane, who is living with Waco, one of the basketball stars of the day. He is making a living as a dog-walker. My two favorites are less about basketball and more about the characters.  Hmm...guess that says something about me.

I hope and suspect this book is one that reluctant readers and sports fans will want to read.

Posted by Anne@HeadFullofBooks at 5:38 PM