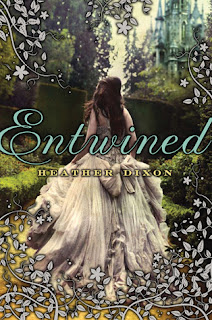 "In the half-magical world of Eathesbury, Azalea is the oldest of 12 daughters and heir to her father's throne. When the sisters' mother dies after a long illness, the siblings find a hidden passageway to an enchanted pavilion under the castle where they can dance all night, secretly breaking the rules of mourning. The mysterious and alluring Keeper makes this possible, but he also seems to have less-than-honorable plans for the girls, especially Azalea."  -Booklist

One book two perspectives. My daughter and I both just finished reading the book Entwined by Heather Dixon. Our reading experiences with the book were very different. I started out listening to the audio version which meant 10 CD's and over 12 hours of recordings.  I usually listen to around 50-60 minutes worth of story per day during my daily commute. If you do the math you'd know that this book would take me around two and half weeks to complete. I shortened up the time near the end because I would read the print version when I wasn't in the car. But it still took me over two weeks to complete. My daughter, on the other hand, picked up the print version of the book before I was even done with it and read the whole book in one day, cover to cover. One book two perspectives.

My perspective:  Entwined is based on the Grimm's Fairy Tale, "The Twelve Dancing Princesses", a fairy tale with which I am unfamiliar. There were many aspects of the story that I found quite fun and compelling. I especially liked the interaction between sisters and the descriptions of their many dances. I thought the dark, brooding atmosphere in of the castle and the plot line added suspense to this Gothic novel. What I didn't like, however, was how slowly the drama unfolded. The book seemed to plod along. The girls got up, ate porridge, had boring lessons, snuck off to dance in the basement where they'd wreck their shoes. Repeat. I also didn't like how Azelea repeatedly got angry, had a fit, and then fainted. At times it felt tedious and mundane, while other times the action was quite intense. That said, I'm guessing that the length of the audiobook contributed to my sense that the story crept along.

Rita's perspective: While the story began a bit slow, with a whiny princess as the "heroine," I quickly began to fall in love with the book. Princess Azalea and her mother both talk about the power of dancing, which is something I find compelling being a dancer myself. To top things off, the story is not all ballgowns and princesses, but full of dark, nightmare-inducing magic of the worst sort. I could not put the book down for fear that the princesses would not make it through to their happy ending. I will admit that I am a hopeless romantic, and grew up wishing that someday I could be a Disney princess, so this book was just up my alley. I have to say that the author is very clever for taking a simple fairy tale and turning it into a novel full of dark magic, interesting twists, and a satisfying ending.

Guess you'll have to read it yourself and then share your perspective below.

Posted by Anne@HeadFullofBooks at 10:44 PM