Toads and Diamonds by Heather Tomlinson 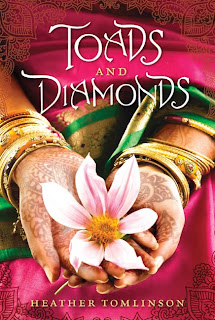 Toads and Diamonds by Heather Tomlinson is a delightful retelling of a classic French tale by Charles Perrault. In the original tale a widow has two daughters.  The eldest is very bad tempered and disagreeable.  The youngest is beautiful and sweet.  The mother dotes on the first and dislikes the youngest making her eat in the kitchen and sending her to get water at the well over a mile away two times a day.  While at the well one day the daughter is asked for a drink by a beggar and she gladly gives her some.  For this the girl is blessed and every time she speaks either flowers or gems come from her mouth. When she returns home her jealous mother sends the eldest to the well in hopes that she too will receive such a blessing.  She is also asked for a drink but her manner is not pleasing so she is cursed. Now when she speaks, toads and snakes come from her mouth.

In Tomlinson's version of Toads and Diamonds the girls are step-sisters who love each other very much and the mother is kindly.  They live in an imaginary country which I pictured to be something like India and they practice a religion which could be a combination of many different religions today. Each girl meets up with the goddess who blesses/curses her and they are forced to leave their home because of riots and panic that occurs when they speak. Are diamonds and flowers blessings and snakes curses?  You are never sure in this tale as they both bring about wonderful and disastrous events.  To be sure the tale acknowledges that gifts are not always what they seem.

The book is told in alternating chapters about the sisters.  As they are separated and their stories diverge we see a very different live for each because of their gifts.  But these gifts eventually bring the girls back together again in a very satisfying, fairytale-type ending.

There is a lot of like in this tale and I hope that it will get the attention from reviewers and readers that it deserves.  However, I fear that it won't.  The reviewers for School Library Journal and for Booklist both commented that the difficult language in the tale will likely pose a challenge to many readers, but it worth the effort. The book was on my Mock Printz consideration list because it had two starred reviews. I am still trying to decide if I'll make it one of my ten picks for that list of books.  At this point I will give it a day or two to simmer and see what I think after getting your feedback and as the story settles in to my memory.
Posted by Anne@HeadFullofBooks at 11:19 AM