The Prince of Mist by Carlos Ruiz Zafon 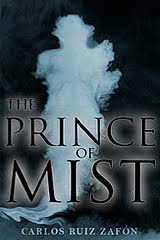 The Prince of Mist by Carlos Ruiz Zafon was originally published as El Príncipe de la Niebla in Spain in 1993. It was the first novel published by Ruiz Zafon. After writing several more YA novels he has since gone on to write and publish several books for adults, most notably, Shadow of the Wind, which I haven't read. Even though the book was written 17 years ago and the translation for it was just completed this year, it has a timeless quality to it.  The beginning of the story is set somewhere in the world during World War II, probably in England, France, or Spain. That fact that the war is going on is only important to the story in that it gives the Carter family cause to move out of the city to the relative safety of the countryside near the ocean. Other than that the story could have been set anytime in the last 60 years and on any beach, as long as there was a lighthouse nearby. And according to the author interview at the end of the book, that was intentional.


I had no idea when I picked it up that it was a horror novel or a ghost story.  I don't normally read this genre of book because I truly do get scared and have trouble sleeping.  But by the time I figured out what this book was, I was already hooked by the plot. Three children move to this ocean-side town with their parents and meet Roland, a local teenager, the grandson of the lighthouse keeper. Roland takes the two oldest children to see an old ship wreck right off shore. In the meantime the youngest, who stayed at home, meets the Prince of Mist in a terrifying circumstance.  Events unfold quickly as the Prince of Mist comes back in many forms to claim what is rightfully his.


Though the book is relatively short (200 pages) it takes quite a while for the plot to develop and for the tension to build.  Dr. Kane, or the Prince of Mist, is a dastardly villain who shows up so many times and in so many forms that one is never quite sure what to expect next. I was on the edge of my seat for half the book.  The book, however had a few flaws that were hard for me to overlook, several of them were translation problems, I think. For example, occasionally words would be used that weren't even invented in the 1940s, such as paramedic, which wasn't coined until the early 1950s in the United States. Also, Carlos Ruiz Zafon attempted to speed up the action by having the grandfather tell long stories from the past about the Dr. Kane rather than have the events unfold and have the reader discover them along the way.


I read this book as a potential book for my Mock Printz workshop.  Though I've decided not to include it on my list I will certainly recommend it to readers that enjoy this genre of books.  I think that fans of The Monstrumologist and of Stephen King will find a lot to like in this book.

Posted by Anne@HeadFullofBooks at 9:13 AM