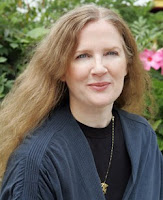 Rick Morgalis, editor for School Library Journal, interviewed Suzanne Collins the author of the Hunger Games Trilogy in preparation for the unveiling of the third book, Mockingjay, later this month.  Though Ms. Collins wasn't able to reveal any tantalizing tidbits about the upcoming book she did reveal some of her thoughts about different aspects of her plot and character development.  For example she compares Katniss to the Mockingjay:
"Now the thing about the mockingjays is that they were never meant to be created. They were not a part of the Capitol’s design....Symbolically, I suppose, Katniss is something like a mockingjay in and of herself. She is a girl who should never have existed. And the reason she does exist is that she comes from District 12, which is sort of the joke of the 12 districts of Panem."
In answer to the question about how disturbing the Hunger Games are because children are killing children she says that she believes that the protagonists in the story shouldn't be on the sidelines:
"If I write a war story for kids, they’re going to be the warriors in it."
And all English teachers will be delighted to learn that Collins has classical underpinnings to her storyline.  She sees the beginning of the story of as a takeoff of The Tale of Minos of Crete but she views Katniss as Spartacus:
"I actually would say that the historical figure of Spartacus really becomes more of a model for the arc of the three books, for Katniss. We don’t know a lot of details about his life, but there was this guy named Spartacus who was a gladiator who broke out of the arena and led a rebellion against an oppressive government that led to what is called the Third Servile War. He caused the Romans quite a bit of trouble."
I love it.  Don't you?  Head over to SLJ and read the whole article here: School Library Journal
Also: congratulations go out to Suzanne Collins on being named to the Time Magazine's Top 100 people of 2010.
Mockingjay.  August 24th.  Can't wait!

Posted by Anne@HeadFullofBooks at 6:17 PM