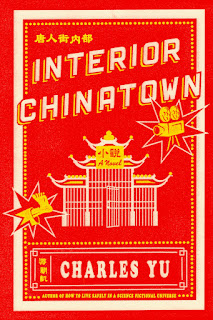 Interior Chinatown by Charles Yu won the National Book Award in 2020 and I imagine that was at least in part because of the format the story was delivered in -- a television script. The story is divided into seven "acts" showing the arc of the life of Willis Wu, a Taiwanese-American actor who keeps getting stuck in the role of "generic Asian man" or "Asian delivery man" when what he hoped for, and finally obtained, was the role of "Kung Fu Guy." Yu splits the script between the interior monologue Willis Wu is having with himself about what is he experiencing and feeling, and the actual script from the TV show "Black and White", a cop show staring Sarah Green, a sexy, white detective, and Miles Turner, her Black partner. If Wu gets any speaking parts on the show he is forced the deliver his lines in a fake Asian accent. But that isn't as bad as when his character dies because "...it sucks to die. The first thing that happens is that you can't work for forty five days." Willis Wu is tired of being a nobody. He wants to be the protagonist of a story, of his story.

There is little distinction between the TV script and real life. When Willis Wu is not being generic Asian guy he lives in a SRO -- single room occupancy-- above the Golden Palace Restaurant, filled with actors who are Koreans, Japanese, Chinese, Vietnamese, all lumped together in a variety of roles like generic Asian man with no distinctions for their actual nationalities. Interior Chinatown, in a lot of ways, is an indictment of Hollywood and it's penchant for treating all Asians according to tired racial tropes.

The most impactful part of the story for me was the courtroom scene where Willis is being tried for being missing. His lawyer, 'Older Brother' shocks Willis and others by making the defense about history -- all the instances of racial discrimination against Asians. He questions Willis as to why Asians have been in America for over 200 years, yet they always seem like they just arrived. He also accuses Willis of thinking that this discrimination isn't as bad as what the country has done to the Blacks, so he is not even worthy of first rate outrage.  Kelsey Chen writing for the Harvard Crimson, puts it this way:

These feelings — of suffering a “second-class oppression” — have caused Asian America to cause our own disappearance from the American political landscape. But Yu makes it clear that this message is not an argument that Asian America’s deafening political silence and activist deference to the supposed master racial narrative of black/white antagonism is solely because of external, systemic pressures. As Willis realizes, “[We are] guilty .... Guilty of playing this role. Letting it define me.…By putting ourselves below everyone, we’re building in a self-defense mechanism. Protecting against real engagement.”

I listened to the audiobook of Interior Chinatown expertly narrated by Joel de la Fuente. (And here I am making a racist confession so please forgive me) -- As I listened, I wondered why the publisher would select a non-Asian to read the part because, wait for it, Joel de la Fuente didn't sound Asian. Groan. Isn't that awful? I fell into the racist trope I was trying to elude. (Joel de la Fuente is Asian American, by the way. What was I expecting? A cheesy accent? A more Asian-sounding name?) The audiobook is only 4 hours and 20 minutes long, proof that the the text of the book was really designed like a TV script. So clever.

In the week since I finished the book the truths within it have hit me in waves. I am 100% convinced that the reason this book won the National Book Award and deserves wide readership isn't because of its format, but because it exposes a deep, deep truth about racism in America. Fortunately for the reader it is entertaining, and often funny too, softening the blow. I highly recommend it.

Posted by Anne@HeadFullofBooks at 12:40 PM