Nonfiction review: A Life on Our Planet: My Witness Statement and a Vision for the Future 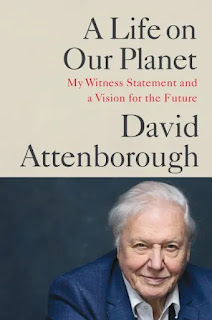 Last year I watched the TV special, A Life on Our Planet hosted by Sir David Attenborough. In the show Attenborough expands on the ideas in his book A Life on Our Planet: My Witness Statement and a Vision for the Future, pointing out all the ways we are killing our planet through our destruction of wild places and lack of biodiversity. Then he gave examples of places making changes that could make a difference if we had enough resolve to see them through.

I was tremendously touched by the show and told everyone I had contact with to watch it.

This year I decided to listen to his audiobook on the same topic, A Life on Our Planet: My Witness Statement and a Vision for the Future, read by Attenborough himself. I almost couldn't do it. It was so depressing to listen to, at least the first part of three. We are in BIG BIG trouble. Our world is giving us big signs that we have reached the breaking point and if we don't act now we may be witnesses to the end of life as we know it, the end of planet earth being able to sustain life.

I've known it but hearing it from such an expert, such a witness to what life was like compared to what it is now, it was excruciatingly difficult. I just want to continue living in the world of magical thinking where everything ends 'happily ever after.'

After hitting the listener with the bad news, Attenborough spends the next two parts of the book talking about his vision for the future...doable things we can do starting right now to halt the march to our destruction. Since I'm not looking at a print version of the book I can't cite specific examples for you but many of the examples he used are already being done on a small scale. Attenborough explains ways he sees us doing these on a large scale, a scale where a correction is possible.

By the end of the book I felt a bit of hope. In fact, I wanted to send a copy of the book to President Biden and other leaders around the world. We have got to get on this plan NOW. They are the ones who need to work out the action plans.

Now, here is the thing. You need to read to read this book or at least watch the TV show, "A Life on Our Planet." I know this review is discouraging you and now you don't want to do it, but you must. We all must listen to and heed the advice of David Attenborough now.

Posted by Anne@HeadFullofBooks at 9:18 PM