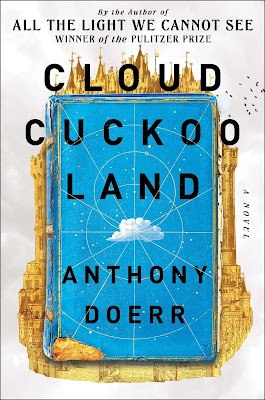 THE ARGOS. MISSION YEAR 65. DAY 307 INSIDE VAULT ONE. Konstance.

A fourteen-year-old girl sits crossed-legged on the floor of a circular vault. A mass of curls haloes her head; her socks are full of holes. This is Konstance.

A WOODCUTTERS' VILLAGE IN THE RHODOPE MOUNTAINS OF BULGARIA. Mid-1400s. Omeir.

The oldest daughter dies of worms, fever takes the middle one, but the boy grows...Twice his mother pays the farrier's wife to travel nine miles upriver from the village to stitch together the gap in the boy's lip with a needle and twine and twice the project fails.

In addition to Konstance, Omeir, there is Anna (CONSTANTINOPLE. 1439-1452), Zeno and Seymore. (LAKEPORT, IDAHO. TWENTIETH AND TWENTY FIRST CENTURY.)

Summary: Yes. The story is told in four+ locations and time periods: in and around Constantinople in days leading up to its fall in 1453; in the mountains of Bulgaria during the same time period; in Lakeport, Idaho starting in the 1940s through 2020; and in a spaceship en route to a possible new land to colonize in the future, 65 years into the mission. What do all of these people throughout time have in common? They all find or interact with a book (codex) called "Cloud Cuckoo Land" written by Antonius Diogenes some time in the second century CE. And that little book made all the difference in the character's lives.

Review: I am not going to tell you more in the summary because this post would be pages long if I did and because I want you to discover the interlocking stories for yourself. Cloud Cuckoo Land is really an ode to story-telling and to the people who preserve those stories going forward. At one point some bibliophile in the book reminds (tells) us how many of the Greek tragedies are lost. “We know that at least one thousand of them were written and performed in Greek theaters in the fifth century B.C. You know how many we have left? Thirty-two.” And of those 32 maybe only a few lines on each page may be legible. In this day and age of the Internet we tend to forget that time and elements have absolutely destroyed important documents from the past.

Cloud Cuckoo Land is, among other things, a paean to the nameless people who have played a role in the transmission of ancient texts and preserved the tales they tell. But it’s also about the consolations of stories and the balm they have provided for millenniums. It’s a wildly inventive novel that teems with life, straddles an enormous range of experience and learning, and embodies the storytelling gifts that it celebrates (NYT).

And, boy howdy, what storytelling! When one reads Cloud Cuckoo Land they will get caught up in the stories of five people over a huge arc of time. And, as a bonus, the reader will learn a bit about Antonius Diogenes, who was a real person, though he didn't actually write a book named "Cloud Cuckoo Land." I looked it up, wondering at the odd turn-of-phrase. Cloud-cuckoo-land was coined by the 4th century BC Greek playwright Aristophanes in the whimsical and extravagant play, The Birds. And if it is used today, though I've never heard it used, it means "A realm of fanciful or impractical, idealistic notions."

My husband and I listened to the audiobook together so we had the benefit of each other to ask for clarification if a thread was lost when trying to keep track of five stories. We had to trust that all the stories were somehow connected and that we would eventually understand how. It was a very satisfying experience when the focus became clearer and those connections were revealed. This doesn't often happen but both of us gave the same rating to the book: 5 stars.