Nonfiction Review: ON TYRANNY: Twenty Lessons From the Twentieth Century 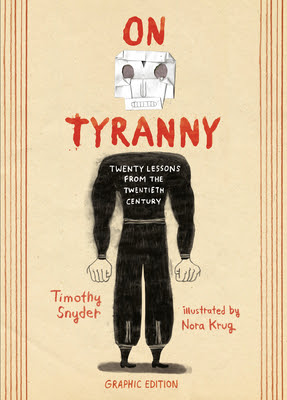 I read ON TYRANNY: Twenty Lessons From the Twentieth Century by Timothy Snyder in October after Rachel Maddow highlighted it while interviewing the author. This version, the graphic edition illustrated by Nora King, had just been published and I determined it was a format I could deal with while attempting to cope with a difficult subject.

I am one of those people who has a really hard time ignoring troubling news and that means that the last two years have been tremendously hard on me. What with 1/3rd the US population (a number I've made up) believing that Trump won the election but had it stolen from him, 1/4th (also made up by me) the population thinking batshit medicine is better than taking a vaccination to prevent the spread of the COVID-19 virus, and whole bunch of Trump-type followers thinking that democracy needs the heave-ho in favor of an authoritarian ruler in our country. It is as if they think anything is better than having a Democrat in power. I knew this book wouldn't be an easy read for me.

Timothy Snyder is a professor of history at Yale University and a scholar of the Holocaust and of fascism. His book On Tyranny was published in 2017, written in the aftermath of Trump's 2016 election and inauguration, to highlight the atrocities taken by Hitler and Stalin in the 1930s and draw some parallels to what he was seeing in our country. He decided to publish a graphic edition and rework some of the material to include the 2020 election because "Trump may be out of the White House now, but the forces that sent him there have hardly disappeared from public life" (New Yorker). 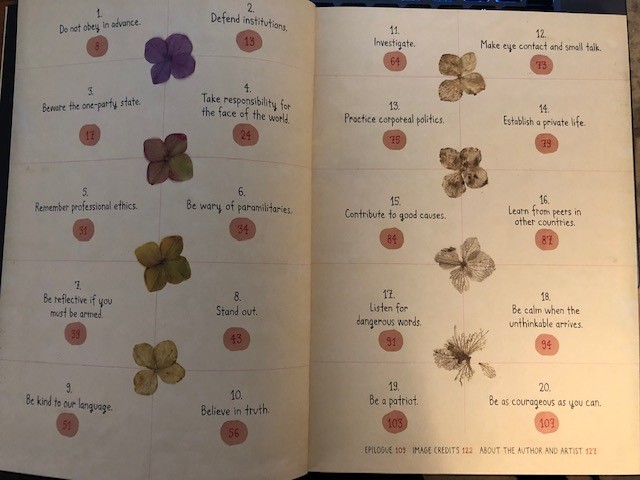 The book is divided up into twenty lessons. Each lesson is a chapter long, starting with 1. Do Not Obey in Advance and ending with 20. Be As Courageous As You Can. Hopefully you can read the rest of the titles of the Table of Contents in the above photo. (If you click on the photo, I think it is made larger.) The first chapter begins with this statement: Most of the power of authoritarianism is freely given. In times like these, individuals think ahead about what a repressive government will want, and then offer themselves without being asked. A citizen who adapts in this way is teaching power what it can do. Snyder goes on to explain how this happened in Germany and Austria prior to WWII. In 1938 when Hilter was thinking about annexing Austria, Austrian 'anticipatory obedience' went right along plans against Jews and cinched their fate. 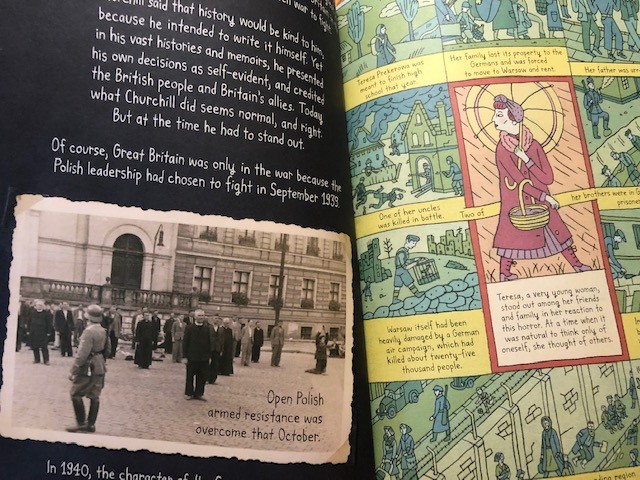 Each chapter built on the last and each chilled me to the bones -- the similarities of what was happening in Russia and Germany in the 1930s with what is happening today in America both astonished and depressed me. I had to talk to someone about what I was reading/learning. It didn't take me long to read the book which had lots of graphics and fewer words than a normal book and once I was finished I turned to my husband and asked him to read it so we could discuss it. He tried but the format didn't appeal to him. He had trouble with the handwritten text and the mixture of illustrations/photos with text interspersed throughout. (See examples above and below.) 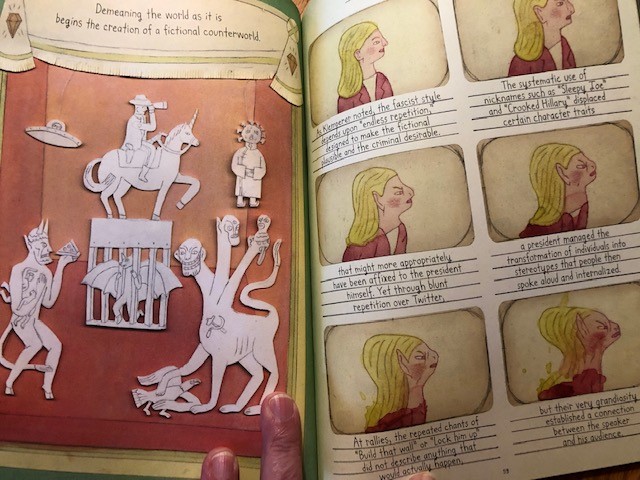 In the illustration above we see the transformation of Hillary Clinton into a monster. This is part of the totalitarians play-book and is part of the four steps of how truth dies (pgs. 58-62). "Step 1- Open hostility to verifiable reality, which involves presented inventions and lies as facts. Step 2- Saying incantations over and over. Repetition creates "truth." So "Crooked Hillary" or "Sleepy Joe" become mantras and start changing perceptions of the masses. Step 3- Is magical thinking or the open embrace of contradictions. 'The vote is rigged but vote for me anyway.' Step 4- Misplaced faith. 'I alone can fix this.'" Ask yourself, does it feel like truth is dying? Do you wonder how so many people can go along with this kind of nonsense? Me, too!

So here we are living in the 1930s 2020s and it is impossible to understand how all this can be happening again. But I haven't lost hope. There are so many good people working to counterbalance the nonsense and as for me I will try to work up to number 20 and be as courageous as I can to help tip the scales back in the right direction.

Posted by Anne@HeadFullofBooks at 2:49 PM