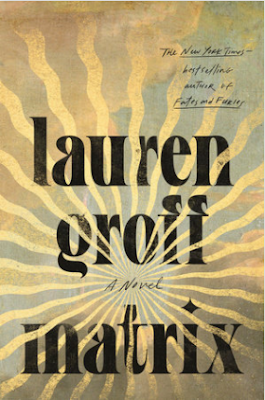 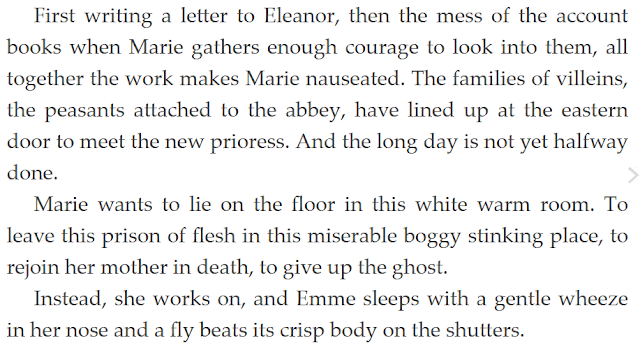 Summary: Matrix introduces the world to a real feminist-poet nun, Marie of France, who lived during the reign of Queen Eleanor in the 12th century. She is the first known female poet from France. Groff takes the tiniest morsel that is known about Marie's life -- a letter in poem form that she wrote to Queen Eleanor asking to be returned to court, away from her banishment to a rundown abbey in England -- and builds a world where women can take care of themselves and wield the power they need to not only survive but thrive.

Marie of France was sent, at age seventeen, to be the prioress of a crumbling abbey filled with aging, sick nuns. She wallows in her grief for a brief time then sets about to remake the abbey into a space where women could do all the things that men usually do and be protected from them at the same time. Groff imagines Marie as a tall, Amazon-type woman who can bend the wills of all who come in front of her yet who loves her nuns as a mother loves her children -- fiercely and passionately. The title of the book, Matrix, sounds like something sci-fi but it is actually from the Latin for mater which means 'mother.'

Review: I decided to read Matrix when it ascended to the 2021 National Book Award finalists list. I know nothing about this time period except a tiny bit about the Crusades, which are also mentioned in this book. Eleanor of Aquitane was also a mystery to me, though there is quite a bit of information about her reign in both France and England.

Everything I read about the book mentioned the fantastic writing and the 21st century twist Groff gave to Marie. I liked the book for the plausible peek at what life was like in monasteries long, long ago. I also enjoyed what a kick-ass person Groff made Marie of France into.  I recognize that this isn't the book for everyone but if you enjoy reading historical fiction or know someone who does I recommend this book to you/them.

With this review I have completed my personal task of reviewing a bunch of past-due reviews. Of course in the meantime I have finished several new books so I am still behind on my reviews, but I'm closer than I was at the time I made the personal blogging challenge. See this list and hyperlinks to the reviews here.  -Anne

Posted by Anne@HeadFullofBooks at 5:05 PM