Nonfiction Review: THE OTHER TALK: Reckoning with White Privilege 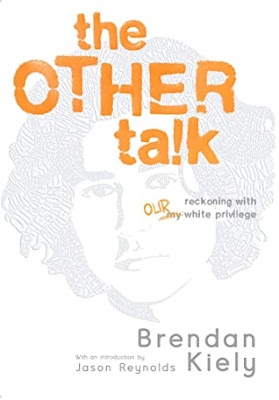 White people don't need 'the talk" that Black parents feel they need to give their children about how to survive racism. But white people do need "the other talk," though their parents rarely set aside any time to deliver it. This other talk is about taking responsibility for White privilege and doing something about it.

Brandon Kiely, a YA author, got his first novel published at the same time as Jason Reynolds, a Black YA author got his first book published. Because of this timing they were sent out on a book tour together to promote their books. Kiely, who is White, couldn't help but notice all the instances where he and Jason Reynolds were treated differently, often with complete disrespect to Reynolds. A deep friendship formed between the men and they have partnered on writing a book together. His experiences during this book tour were the catalyst for Kiely to start thinking about White privilege in a new way and to start looking for ways that he could make a positive difference toward moving forward the discourse about racism in our country. As he was coming to terms, often uncomfortable terms, with his Whiteness, Kiely became more and more convinced that Whites need to talk to Whites about White privilege and about the ways that people with power “legalized, institutionalized, and systematized racism in America.”

In a lot of ways the book is a memoir because Kiely writes about his own experiences growing up White while comparing them to the experiences of members of the Global Majority (BIPOC). For example, when Kiely was a new driver, he got pulled over for speeding. I was driving 40 miles over the speed limit. Instead of getting a ticket, or getting hauled off to jail, he got a fatherly warning from the police officer, "Go home, be safe, keep your friends safe." We all have heard of contrasting stories where Black teens are pulled over for minor traffic infractions and they end up hauled to jail or worse, shot to death.

As I made my way through The Other Talk I realized that this is the book I've needed to read. As a White person who is trying to become less racists and more antiracist, I've had a hard time fully appreciating the message when it is delivered by a person of color (Global Majority). I also don't think that BIPOC people should have to spend their whole lives trying to make White people see the light.  As I described the book to my Bible Study class, filled with old white ladies like myself, all of them said they wanted to read it. They have been looking for a book to help them bridge the gap in their understanding on the topic of White privilege.

Over a month ago I checked the list of books nominated for the Cybils Nonfiction category. As a second round judge I wanted to get a jump on reading the books that may be chosen as finalists. I am hoping and keeping my fingers crossed that this book is selected as a finalist. It is an important book, one that should be read by teens, its target audience, and adults alike.

I hope you will read it, too. Request it from your library. If they don't have a copy, ask them to buy it. It's that good and even more important that this book gets read by as many people as possible. (BTW-I'm buying a copy for my church library so all those gals  in my Bible Study CAN and hopefully WILL read the book. No excuses.