Review and quotes: TERCIEL AND ELINOR 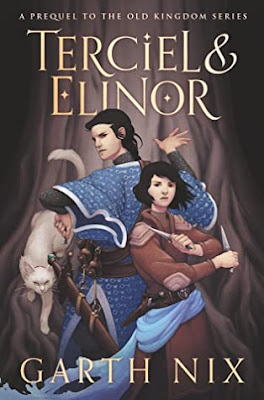 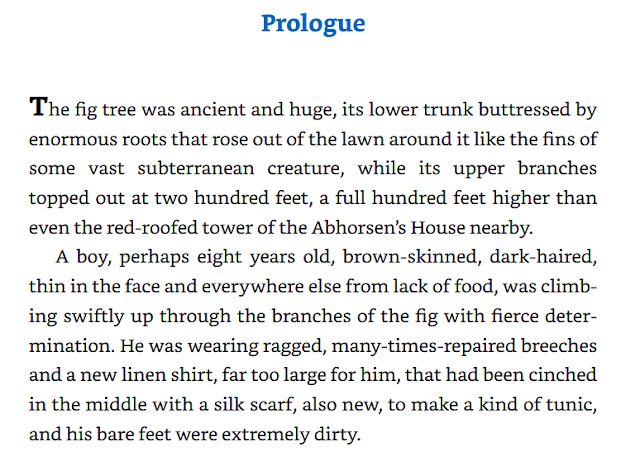 Summary: In the Old Kingdom, eighteen-year-old Terciel is being trained in the art of necromancy by his great-aunt, Tizanael. She is the Abhorsen, he, the Abhorsen-in-waiting. It is their job to make sure that the dead do not come back to life.

Across the wall in Ancelstierre, Elinor is growing up in a very secluded life. Her father is dead. Her mother is a tyrant, and her only friends are her governess and the groom, an old man who used to be a circus performer. When Elinor's mother goes into an odd sleep state between life and death, the governess sends a message to the Abhorsen for help. Terciel is sent in her stead but before he can help the mother, a horror emerges, killing many and burning down the house. This event leads Elinor to learn about her past and her connection to the Old Kingdom.

This book is the sixth in the Old Kingdom series by Garth Nix and it is the prequel to Sabriel, the first book in the series. It is in this book that we meet Terciel and Elinor, Sabriel's parents.

Review: I love The Old Kingdom series, having read the first three books soon after I became a teen librarian, then subsequent books as they were released. Nix is not in a hurry with this series, so often there are long waits between books. But not so long that one forgets the magic of the series. When I learned that Terciel and Elinor was published, I dropped everything and got the audiobook from the library. My daughter, another fan of the series, checked out another copy of the audiobook at the same time. We thought we could pace ourselves and discuss what was happening as we listened, but Carly got way ahead of me and had to wait impatiently for me to catch up before our discussion.

If you aren't familiar with the series, don't start here. Read the series according to publication dates. The stories will not unfold in chronological order but will reveal aspects of the story by jumping back and forth. After finishing this book, my daughter decided to go back and re-read all the rest of the books in the series with the exception of Clariel. It is the darkest of all the books and has no characters that are met in any of the other books.