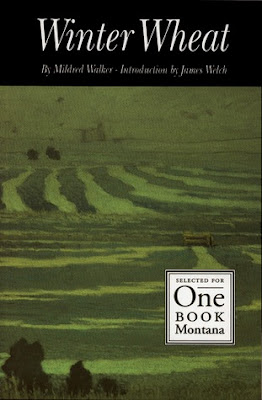 I recently attended an event with several friends. The host's mother was visiting from Montana and she and I always have a lot to talk about since we are both retired librarians. At one point in the conversation I asked if she had read Whistling Season by Ivan Doig, a Montana author and a book about one-room schools. She hadn't but then she told me if I liked Doig I should read something by Mildred Walker, another Montana author. At that point she disappeared into the house and reappeared a few minutes later with a book in her hands, Winter Wheat by Mildred Walker. She pressed it into my hands and told me to keep it or pass it on after I was done with it. She assured me she had another copy. I normally don't like getting books from people because they make me feel so much pressure. But I was intrigued by this one sporting a big sticker, "One Book Montana."

I've heard of towns selecting a book for everyone to read, or counties, but not whole states. Winter Wheat was the first book to be selected for the all-state read. An article from the Missoulian by Sherry Jones (May 29, 2003) describes the One Book Montana this way:


If you're going to ask everyone in the entire state of Montana to read the same book at the same time - as the Montana Center for the Book is doing - it had better be a darned good book, one college students and townies and farmers and ranchers can all relate to, one good enough to find its way into classrooms, one entertaining enough to keep those pages turning and dense enough to keep those tongues wagging long after the back cover has been closed with a satisfied thud.

The committee selected Winter Wheat, published in the 1940s, as its first book because they thought it would "amuse, inspire, provoke, and uplift state readers." Not being a Montanan myself I am here to say that the book does all of those things, even if you don't live in the state.

The story is set on a dry-wheat ranch in eastern Montana. Dry, I came to understand, means that the rancher does not water the wheat and relies on nature for the amount of water the crop gets. Ellen Webb is the only daughter to a reluctant rancher from Vermont and his wife, Anna, whom he met during WWI in Russia. Ellen loves the land and her life but dreams of being a linguist. After one year at the University of Minnesota she has to stop her schooling because the she could not afford tuition after a year of a failed crop. When her boyfriend comes to visit, she suddenly sees her home, parents, and the landscape through his eyes and finds them wanting. When he calls off the relationship, Ellen's heart is broken not only for his love, but for the loss of her first love for family and home. A lonely year as a teacher in a remote one-room school house gave her lots of time to gain a perspective and to come to accept and once again relish the life she has always loved on a land she loves.

If there is a stereotype of a person living in the west, it is of a lonely white male who wants to do everything himself and not accept help from others. I would add that this person is probably wearing cowboy hats and boots, to my way of thinking. But in Winter Wheat, Ellen helps break that stereotype. For one thing, she is female. And the book is not so much about independence--- though Ellen is certainly a very competent and self-reliant person---it is more about the connections we have with other people and with the land. Though Montana is usually thought of as Big Sky Country, here we are looking down more often at the dirt and mud (they call gumbo), the flowers and the new wheat growth, and the snow or rain.

Winter Wheat is beautifully written. It is simple and straight-forward, kind of like the people I have come to know who are from the great state of Montana. It isn't flowery or especially sentimental, it is just solid, good writing. The kind of book I want to share with my mom, whose father was a homesteader back in the early 1900s, or my husband, whose grandfather grew up on a ranch in eastern Oregon.

A side note about the book. It was published in 1944 and WWII does enter the story. I used to tell students that books like this one would read as historical fiction but it wasn't written to be historical fiction. It was written as contemporary literature. I appreciate books from which I can learn something about what life was like during the days leading up to and the beginning of a huge event, like war. It feels like reading a first-hand account. The war wasn't the point of the book, but it gives today's reader a peek at the past and new insights.
Posted by Anne@HeadFullofBooks at 5:27 PM