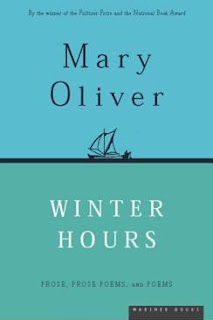 A few months ago I saw a blog post about Mary Oliver's Winter Hours: Prose, Prose Poems, and Poems. I thought, mistakenly, that it was something new. Something published posthumously by my favorite poet. I quickly started searching for it and found a copy available for checkout from my public library. It wasn't something new, published in 1999 Winter Hours: Prose, Prose Poems, and Poems had been around for years I'd just missed it. Old or new, it was still Mary Oliver's writing and relished the moments I had reading through it. Several of the essays were very familiar. I'm sure I've read them before, probably in a compilation collection published after this one, but I am not sure.

In the forward, Mary Oliver says that everything in this collection is autobiographical, written out of "meditation and memory" and she thinks of her prose not so much as essays but more like prose poems (hence the subtitle.) I would correct her, though, because the chapters on the poets Poe, Whitman, Hopkins, and Frost are certainly not autobiographical. Here, she says are her thoughts on poets written for a class she was teaching. But she says, "Consider what is written rather as parts of a conversation, or a long and slowly arriving letter--- somewhat disorderly, natural in expression, and happily unfinished." So we shall.

As in all the other books and collections I've read by Mary Oliver this one is full of nature, but in this book one is very aware of the author herself. The first essay is titled "Building a house" where she describes building a small (very small) house in her backyard from scavenged materials. She compares herself as the opposite of a young carpenter she knows who is very good at building things but likes to spend his lunch hour quietly writing poetry. His poetry isn't very good, but he enjoys writing it. Oliver recognizes that her building skills aren't very good, but sometimes a person just needs to do something physical, from start to finish. This is when she decided to build the little house. And though it was rarely used for its purpose, as a writing shed, she is tremendously satisfied with the product of her labors.

In her essay "The Swan", Mary Oliver talks about the "rules" she set out for herself when she began her writing career. Each poem must "have a genuine body, it must have sincere energy, and it must have a spiritual purpose." If the poem lacked any of these elements she would discard it. Later she added other "rules" or "admonitions and consents." She wanted every poem to "rest in intensity" and to be full of "pictures of the world." She also wanted her poems to "carry a thread from perceptually felt to the intellectual world." She wanted readers to recognize that her professional life was was full of "intelligence, patience, passion, and whimsy." This essay, more than any of the others, gave me insights as to why I like Mary Oliver poems above all others.

Part two of the collection were the essays on the four poets: Poe, Hopkins, Frost, and Whitman. I marveled at her thoughts and insights on these remarkable men and their works. I found the essay on Frost to be the most profound, where I really gained new knowledge. She points out that in almost all of Frost's lyrical poems something is wrong. The metaphoric language names something disquieting, yet the meter and rhyme tells us everything is just fine. She says the general reader of his poem finds them easy to read and enjoyable yet she finds them heavy-hearted. After he became famous for his writings, his poems changed to reflect more cheerfulness, as if he thought that is what the public wanted so he would give it to them. This essay, and the other three on the poets, would become part of my professional library were I an English teacher who had to teach about poetry. All four of the essays are very insightful.

In part three, Oliver has three meditations she calls "Sand Dabs". I had to look up the term. A sand dab is a small type of flounder, or a small, well put-together fish. It is a clever title for meditations which are all one or two lines long. Here are few that provoked insights in me:


You can have the other words---chance, luck, coincidence, serendipity. I'll take grace. I don't know what it is exactly, but I'll take it.

I am a performing artist; I perform admiration. Come with me, I want my poems to say. And do the same.

Every day I think of Schubert and the mystery of his six hundred songs.

As is always the case, Mary Oliver helps me stop and wonder. I know from her own words in this collection, that she does this on purpose. At the end of part four she talks about wonder...about finding an unfindable bird and the moment he disappears another bird, hundreds of miles from his home, appears. It is hard to top such a moment but she does. Once, she says, she came upon two angels keeping guard beside a car."Light streamed from them, and a splash of flames lay quietly under their feet. What is one to do with such moments, such memories, but cherish them?"

During this Lenten season I am charged to be wonderstruck, to be open and aware for God and all his wonders. Mary Oliver is always a good place to start when looking for an opening.

She asks, "Who knows what is beyond the known?" and "If you think that any day the secret of light might come, would you not keep the house of your mind ready?"

I'll let you ponder those last two questions as my closing.