TTT: Books in a series that work fine as standalones 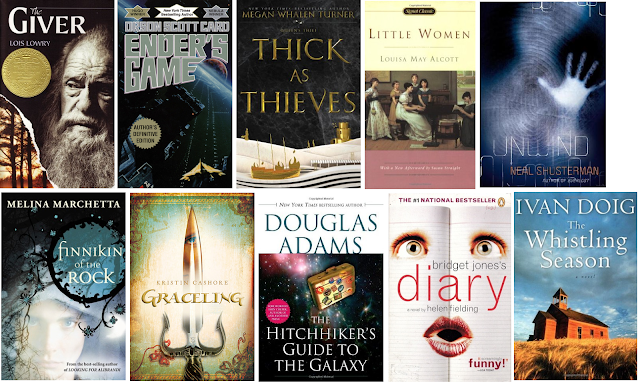 Top Ten Tuesday: Books in a series that work fine as a standalone. (A twist on the theme of standalone books which need a sequel.)

1. The Giver by Lois Lowry---It is the first book of a four book series, but I think most people read it as a standalone and it is perfect the way it is.

2. Ender's Game by Orson Scott Card---I didn't even know how convoluted the Ender's Game series was until I looked at this diagram on Wikipedia. I liked the book but felt no need to read on.

3. Thick As Thieves by Megan Whalen Turner---Is the fourth or fifth book in Queen's Thief series but it works well as a standalone...I should know. I read it and none of the previous books.

4. Little Women by Louisa May Alcott---Actually the book we know as Little Women was originally published as two books. But put that aside, it doesn't need the sequels to be a classic.

5. Unwind by Neal Shusterman---honestly I haven't read any of the other books in the Unwind Dystology, yet I liked the way the first book ended and had no need to read on.

6. Finnikin of the Rock by Melina Marchetta---the first book of the Lumatere series. I had no need to read on, though many of my students enjoyed the whole series.

7. Graceling by Kristin Cashore---Now I imagine I'll get some push back on this choice because Fire, the prequel, is so excellent, too. But I would have been happy with just the first book, even though I read on.

8. The Hitchhiker's Guide to the Galaxy by Douglas Adams---I love, love this book but have never read on...which doesn't mean I wouldn't love the sequels.

9. Bridget Jones' Diary by Helen Fielding---I read this book years ago and thought it was just fun, not even realizing it was a retelling of Pride and Prejudice.

10. Whistling Season by Ivan Doig--- This book is part of a trilogy, which my husband tells me if very good, but I stopped after the first book. Whistling Season is one of my favorite books ever. I've reread it several times.

Posted by Anne@HeadFullofBooks at 9:29 PM