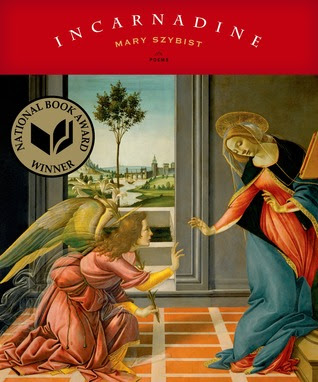 Okay. True confession. Most of the time I don't "get" poetry. I often like poetry but usually only pieces or bits of a poem sing out to me. Those songs, however, usually speak directly to my heart so I am swept away with the sound of the words and the emotions that are generated. That is what happened when I read the poems in Incarnadine by Mary Szybist. Most of the poems didn't make any sense to me but bits and pieces transported me to some other place for a while, long enough for me ruminate on a word or phrase before returning to reality.

So let's see if I did "get" anything from this slim volume of poems. First the cover illustration is a copy of a Botticelli painting of the Virgin Mary being visited by angel Gabriel titled the "Annunciation." It just so happens that nine of the poems in the collection have annunciation in their titles. So my first clue is that I should look for some grand announcements, like those when Gabriel told Mary that she was going to be the mother of our savior. Though I am dubious since these titles don't quite evoke that big event: "Annunciation (from the grass beneath them)", "Annunciation with Nabakov and Starr", "Annunciation as Fender's Blue Butterfly with Kincaid's Lupine", "Annunciation Under Erasure" and five others. My favorite among them is the last, Under Erasure. Imagine the scripture, Luke 1:26-38, but with important words erased. That is this poem: The Lord is/troubled/ in  mind/ be afraid Mary. Clever. Some annunciations just don't live up to the original.

The second thing I noticed was the title. Incarnadine sounds a lot like another holy word, "incarnate", which means "embodied in human form (usually referring to deity or spirit.)" So now my senses are open to poems which will mention something about God or Christ among us, as one of us. Perhaps I missed all the mentions but one poem, a concrete poem titled "How (Not) to Speak to God" stands out for it's uniqueness drawn in the shape of a sun with rays. "who saw the the world incarnadined, the current flowing/whose face is electrified by its own light/ who could be a piece of flame, a piece of mind shimmering." This poem chased me to the dictionary where I learned that incarnadine is actually a word all its own. It means a bright crimson or pinkish-red color. Hmm. Guess that explains the red color on the cover. Learned something new.

Another theme I noticed may have been the actual point, a play on the author's first name, Mary. I couldn't decide if I was supposed to think of the mother of God or the woman who wrote the poems  as I tried to understand the meaning behind the words. Perhaps that was the what I was supposed to grapple with because scripture tells us that Mary of Biblical fame, was just a girl, like anyone else except she was special. The poem "Hail" really does seem like a poem from Mary, the poet, to her namesake. In another poem titled "Update on Mary" one has to wonder if Mary, the poet, is giving us an update on herself. It begins, "Mary always thinks that as soon as she gets a few more things done and finishes the dishes, she will open herself to God." Oh boy, can I ever relate to that phrase.

Many of the poems seemed to be pulled from the headlines or directly from Mary's life. In "On a Spring Day in Baltimore, the Art Teacher Asks the Class to Draw Flowers" one gets the creepy feeling that the art teacher is a lech...he is always around with his sketchbook drawing the girl. Just when I am ready to skip to the next poem I come upon this line, "I closed my eyes, felt the sunlight on my thighs. To be beheld like that --- it felt like glittering."  I know what it feel like to glitter in God's sight, I'm guessing that Mary does, too, and she knows what it feels like to not experience the feeling any longer. We see it in the poem "Holy" which is about the illness and eventual death of her mother. In this time and space Mary can no longer feel the Holy Spirit and is bereft. "Fragile mother, impossible spirit, will you fall so far/ from me, will you leave me/ to me?"

I decided to read Incarnadine as part of my personal challenge to read National Book Award winners. This one won the poetry category in 2013. I'm glad I found it!