GREAT HOUSE...more a reflection than a review 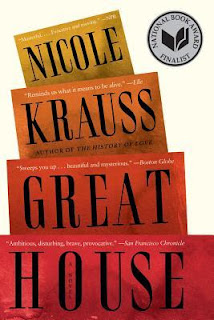 GREAT HOUSE by Nicole Krauss has been on my reading list for almost a decade. It was given to me by my husband for Christmas in 2010. He knew how much I liked The History of Love by the same author so it was a natural choice for a guy trying to please his wife. I was pleased but not enough to actually get right to reading the book and eventually it got relegated to a back book shelf, nearly forgotten. Then about a month ago I embarked on a personal challenge to read at least two of the National Book Award winners or finalists for the past ten years. I wasn't interested in reading the 2010 award winner for fiction, so I looked at the finalist list and noticed Great House. It was time to dust off my own copy.

As I said in my title for this blog post, this will likely be more a reflection than a review. I am not sure I could adequately review the book anyway. It seems like the book would require a greater mind than mine to decipher. In lieu of that, here are a few of my reflections, or more accurately, a few random thoughts...

On the importance and detrimental aspects of goals: Several years ago I heard about a Olympic medal skier who was suicidal. She didn't kill herself and when she recovered she told her story to a journalist. I don't remember the whole story but what stuck with me was this (loosely paraphrased) statement, "I earned a gold medal. It had been my life's dream and my one goal. Once I accomplished it, I ran out of goals and didn't know what to do with myself." That skier's story came to my mind several times as I read Great House. One man obsessed with a goal, distracted by nothing but that goal, kills himself once it is achieved. Heavy stuff.

On our interconnectedness; Sometimes it isn't obvious how interconnected we are, other times we can't escape our connections to people we don't even know. Part 1 of Great House rolls out seemingly four separate stories. Part two draws the connections between the stories and the people. It became fun, almost a game, to guess how the connections would draw together in the end.

Like a dream: Have you ever had a long dream that seems to go on and on all night and when you are roused a bit, you return to the sleep state to pick up the dream thread again? Often, when this happens to me, the second (or third or fourth) stab at the dream will change a bit each time because new details have been brought forth. I felt like I was in a sort of dream state as I read this book. There was no dialogue, only written or spoken recollections, so all the action comes at the reader in a sort of shrouded way, cloaked by time. The book was much more thought-full than action/plot-full. Like most dreams, as I stepped away from the book, the details faded. I am left mostly with impressions.

Great loss: "A Great Loss" would probably have been a better title for this book but Great House derives from a historical event where all of Jerusalem was burned and the Jews had lost their great house, such a great loss (2 Kings 25:9: He burned the house of the LORD, the king's house, and all the houses of Jerusalem; even every great house he burned with fire. ) The title of the book and this scripture wasn't revealed until page 279 of 289. It kept me wondering and watching for it. All of the main character's lives were shaped by great losses, most by the Holocaust or the Jewish experience. Let's call these people the "enchanters". The narrators of the book were all caught in the web of their enchanter's sorrow. And, as the reviewer from the NYT said, all the enchanters were enchanted by their own sorrows. Ah, what a tangled web!

On the importance of storytelling: each of the four narrators tells a story that isn't really theirs to tell. Nadia, tells the story to "Your Honor" about how she got the desk from a Chilean poet, Daniel Varsky; a father tells of his complicated relationship with his son, Dov; a husband tells the story of his wife, a Holocaust survivor and writer, and her big desk which she gives to a stranger, Daniel Varsky; and an American woman tells the story of her love with Yoav Weitz, son of an antiques dealer who is obsessed with locating the desk. Once the story is told by the narrator, the stranglehold it had on the teller seems to be loosened.

Comparisons: If you have heard of The History of Love and not this book, I am not surprised. In a lot of ways the two books are similar: both have a lost object that is being sought: a book, in the first, and a desk, in the second. But while they have similar qualities, the important difference is the first book is funny and endearing, the second has none of that. It is pretty hard to want to read something which is mostly depressing from start to finish.

My job is done: I wanted to read this book to satisfy my own personal goal related to National Book Award winners/finalist. I've done that. I also want to read more books that I own, which relates to another reading challenge which starts on Friday to read more books from my own shelves. Since I don't plan a reread of this one, I will donate it to the public library for their annual book sale.

Posted by Anne@HeadFullofBooks at 2:29 PM