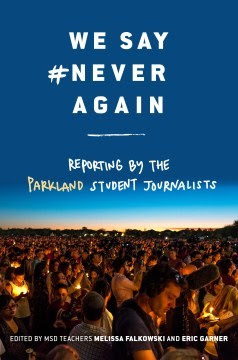 We Say #NeverAgain: Reporting by the Parkland Student Journalists is an important book for today's students and anyone interested in how to resist in a positive way. The editors of the book are Melissa Falkowski and Eric Garner, the MSD journalism and broadcasting teachers. Aside from an essay or two as introduction to this book project written by the teachers, all the other essays in the book are from student contributors.

On February 14, 2017 the unthinkable happened at Marjorie Stoneman Douglas (MSD) High School in Parkland, Florida. A shooter, familiar with the school, came into the building and killed seventeen students and staff and wounding many, many more. Within days of the tragedy, students had decided to do something to put an end to gun violence and started a movement called #NeverAgain. Many of the most impactful voices for this movement came from the school's journalism and broadcasting programs. These students have credited their teachers and the training they received at school for allowing them to think critically and communicate clearly---enabling them to launch a movement that has inspired a nation (Book blurb).

The book is divided into three parts: 1. Activism, 2. MSD Strong, 3. What Comes Next. It is not designed to give a play-by-play of the day's shooting and the aftermath. In fact, nothing was said in the whole book about the shooter, including his name. That was an intentional decision by the students. They did not want to give the shooter any attention, which he desired.

Part 1: Activism---from the Parkland March and Rally, the bus full of students lobbying the Florida Legislature in Tallahassee, to the Washington, D.C. March for Our Lives, student's essays touched on what it was like to be suddenly thrust into national limelight.

Many of the students talked about how their role as a student journalist at MSDHS helped them to deal with their grief and trauma because even as the tragedy was unfolding they recognized they would need to report on it, so they put on their journalist hat and took the victim hat off. Either way, all the students wished that the tragedy had never happened, even with all the national attention they received for their activism. Dalaney Tarr's opening sentence of her essay, "Pushed Into the Spotlight", echoed what many others reported. "To me, the worst thing anyone can say to hurt us is that we're 'just doing this for fame'...Every day, I long for the life I once lived" (21).

The students also had to deal with their disillusionment with politicians and certain media representatives. When the students met with their Florida senators Nelson and Rubio, they learned very quickly that constituent concerns may not top their priorities, as Ryan Deitsch, in his essay "Holding Politicians to Account", discovered.


"We researched the candidates and learned that Marco Rubio had taken over $600,000 from the NRA. I couldn't wait to ask him a question during our town hall: Why do we as children or young adults have to march on Washington, DC to save our lives? That is when I learned what political dancing was...when a politician is asked a question and he/she doesn't answer but hijacks the interview to get out their own agenda. This happened on stage right in front of me, and I was powerless to stop it" ( p. 77).

Many of the students showed wisdom beyond their years and expressed themselves very eloquently as exampled by Richard Doan in "Shining a Light on Gun Violence". He says, "I believe that this nation needs not a heated political argument, but a respectful discussion about guns and mental health. Each side must be willing to listen to the opinions of the other side" (87).

Many of the essays were about the experience of planning, putting on, and participating in The March For Our Lives. Some were speakers while others worked behind the scenes to coordinate the program while others were journalists in the field. One such person was Josh Riemer ("Photographing Revolution") a MSD photographer at the March. He talked not only about his craft but how being involved made him feel hope for the future:


"For the first time in a long time, I felt that we as a people, young and old, were making a difference. I felt that finally, after all these years, the gears of democracy and bureaucracy were grinding, and the world change for the better...Photos are how I express myself. These photos are my contribution to the revolution. A new day is coming, and until then, we're not going to stop documenting change, and we are certainly not going to stop to marching" (111).

Suzanna Barna ("Bird's-Eye View") talked about how awful events were leading up to the march and how much anxiety she had leading up to the day until the "moment I realized that no matter what happened during the march lineup, the real hope lay with the crowds below me, full of individuals and groups from all over the country---not just Florida---who had decided that they'd had enough of gun violence and were ready to speak up" (118).

This sentiment was reiterated over and over by these student journalists. Nikhita Nookala ("Backstage at the March") was hopeful for the legacy of her school. "Not the shooting, not the blood in the hallways, but the march. The voices. The memories. Is this the legacy of my alma mater? I can only hope." (122)

Part 2: MSD Strong---Stories from the home front. Heroes on the day of the shooting. Celebrating the lives of the seventeen students who lost their lives to the shooter. Figuring out how to live in the face of deep grief and the new reality.

Seemingly small acts which are viewed as heroic when looked through the lens of the day. Teachers who kept doors open to catch as many students as possible. Students performing first aid. Students helping teachers who were clearly suffering and upset. One boy's act of shutting the classroom door saved the lives of nearly everyone in the room.

Carly Novell in her well-written essay "Balancing Guilt with Opportunities", talks about the opportunities she has had as a journalist juxtaposed to the horror of the event.


"When we were given the opportunity to write the book, I struggled with the idea---like every opportunity I have been given in the aftermath of my school's shooting---because seventeen people had to die for us to have this platform. It feels unfair that seventeen voices were taken away for ours to be amplified" (161).

Part 3: What Comes Next?---After the days following the event and the march when the media goes home and pays attention to other issues plaguing our country. What are these students left with? What will they do with their newly-found activism?

David Hogg, a student activist who received so much critism by conservatives, talks about the effect of social media in "Leveraging Social Media". He understands, better than many adults, how to use social media to effect change. He also was surprisingly thoughtful toward those who attacked him personally for his activism.


"And let me add a word of compassion to the people online who have said some shockingly hateful things to me and my friends. That hate didn't occur spontaneously on the day we decided to speak out in favor of sanity in our gun policies. That hate comes from a place of deep unhappiness, and even trauma...Hate loves company. And hate always goes in search of somebody to blame. That is the downside of social media---groups can organize like never before for positive change, but mobs can also form to do bad things. in any case, a human response to someone who shows you hatred can disarm the hate, and might even lead to actual understanding" (218).

David Hogg and several of his classmates embarked upon a tour across America to take their message of #NeverAgain and have seen firsthand how divided our country is. He has seen how our politicians and leaders exploit these differences rather than trying to work for positive change. Into this world, the students are moving, trying to make the world safer due to sane gun laws. ("Road to Change" 237).

The last essay of the book, "Independent Student-Run Newsrooms"  was written by the journalism teacher, Melissa Falkowski. She urges all high schools to support a vibrant, student-led journalism program. This article should be required reading for teachers, administrators, and school board members who constantly want to squash student efforts to write and produce news as they see it. Besides, shes says, "student newsrooms are the ultimate exercise in project-based learning" (244). That sentence alone should motivate school boards and administrators to give journalism more room in their schools!

I became aware of We Say #NeverAgain because it was a nominated book for the Cybils Award this year. (Are you paying attention MSD journalism and broadcasting students? Your book has been nominated for an award!) Though I was often aware that I was reading essays written by students, taken as a whole the book is very good. I am a fan of recognizing works which reflect what is happening in our country and in the news. No event of 2017 captured more of the country's heart and soul as the events at MSDHS on February 14, 2017 and the subsequent March for Our Lives and the #NeverAgain movement. For this reason, I will be recommending that this book move on to round two of the judging. Be mindful that I am one of many but I will do my best to make my voice be heard. Thank you for this book. It is an important piece of information for students of today. I have several friends who teach journalism and I will certainly recommend that they read it and share the contents with their students. Librarians, make sure you have at least one copy in your library and then suggest that your student journalists read it.

Posted by Anne@HeadFullofBooks at 12:33 PM