This is the book I'm reading right now--- 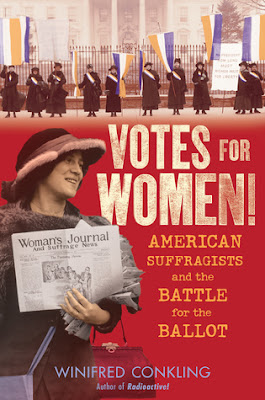 Title: Votes for Women: American Suffragists and the Battle for the Ballot by Winifred Conkling


Everyone expected Harry T. Burn to vote against the Nineteenth Amendment, which gave women the right to vote. The twenty-four-year-old first-term member of the Tennessee House of Representatives was from Niota, Tennessee, a conservative area in the mountains. It was August 1920. Burn was running for reelection in the fall, and most of his constituents were opposed to female suffrage. If he wanted to win, surely, they thought, he would vote against the bill. But Burn hadn't made up his mind.


It was at the meeting there that Anthony organized a new group, the Woman's State Temperance Society. Anthony wrote hundreds of letters of invitation to prospective members, and almost single-handedly raised the money, hired the hall, and organized the speakers for the group's first meeting. One of the people she contacted was her new friend Elizabeth Cady Stanton, whom she recruited to serve as president and to write a speech for Anthony to present. "I will gladly do all in my power to aid you," Stanton responded.

Review: Starting with Elizabeth Cady Stanton, whose father wished aloud that she was a boy, Votes for Women takes a deep dive into the lives of the suffragists and their struggles to eventually see to the passage of the 19th amendment to the US Constitution, securing the right for women to vote.
It was a long struggle. When Stanton held the first meeting on women's rights in 1848 in Seneca Falls, New York, no one knew it would take 72 years to secure voting rights for women. Only one woman, Charlotte Woodward Pierce, who attended that first meeting was even alive in 1920 and she was too old and sick to vote. Along the way so many women dedicated their lives to the women's rights concept, which not only asked for the right to vote but also the right to own property, to attend college, to keep their own wages---not just hand them over to their husbands, and if they divorced, to keep their children.
The path of suffrage was not a straight one. Most of the early advocates met because of their activities related to abolition or temperance. The Friday 56 quote talks about Susan B. Anthony's early work on temperance. She formed a women's temperance branch because she was not allowed to speak at the general meeting, even though she had so good ideas, because she was a woman. Just when things seemed to be going in the right direction, the Civil War broke out and the leaders of the suffrage movement decided to leave it alone as the country focused on more pressing needs. After the war, the woman were ready to pick up the cause again but now the issue of voting for black men came up and legislators didn't want the women to sink the men. Oddly, though Stanton and Anthony were good friends with Frederick Douglass, their talk about the vote for black men sounded very racist. It is such a common thing for factions to fall apart when one feels that the other is stepping on their toes.
By the late 1800s other women had to step up to the leadership as the initial members were aging though Anthony continued to lobby Congress right up to her death in 1906. By the time that Alice Paul got involved with the legislative branch of the Women's Suffrage Organization in 1913, women were tired of waiting for their turn. Alice decided that they needed to be more active and more militant like their sisters in Great Britain. She organized marches and the Silent Sentinels---women holding banners in front of the White House with messages for the President . (Look at the cover photo, the Silent Sentinels stand in the background.) As these silent protests went on, the police started arresting the women. Several of the women, Paul included, were sent to a prison with such deplorable conditions that they went on a hunger strike. Paul asked to treated like a murderer on death row who had sanitary living conditions and good food to eat. After several weeks of this the President relented. He didn't want to have the death of any suffragists on his hands.
This time when war came started (WWI), the women did not relent and eventually both the US House and the Senate passed the 19th Amendment in 1919. Now it was time for the states to act. It took another year for the ratification process to take place. It was hard work finding the states willing to sign on. They needed 35 states to ratify. When the vote passed the Tennessee Senate, the 35th state, the women needed the Tennessee House to vote yes, but their prospects didn't look good. On the first try the vote was a tie. Harry T. Burn had voted no (from the Book Beginnings quote.) But on the final vote, he switched his vote to a yes. What people didn't know at the time, his mother had written urging him to vote yes. The 19th amendment was finally ratified in 1920. Women could finally vote.
Sometimes book reviews make books sound so boring, one would be crazy to want to read it. That is the case with this review. I know the book sounds boring but it is actually quite fascinating. I thought I knew a lot about the suffrage movement and about the key advocates, but I really had no idea. I learned so much and am in awe of the courageous women who fought for my right to vote. I highly recommend this book to you.
In addition to the wonderful narrative nonfiction writing, author Winifred Conkling (with her suffragist-sounding name) has put together a very credible book to use for research. There is a timeline of events and individuals. There is a an exhaustive bibliography and helpful source notes. This book should be purchased for every high school and public library.