Nonfiction Review: Resist: 35 Profiles of Ordinary People Who Rose Up Against Tyranny and Injustice 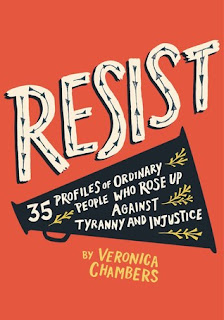 It is a theme this year in YA/MG publishing of nonfiction to compile collections of essays/authors on topics related to resistance, hope, persistence, and mental illness or the books highlight particular people who have stood up and stood out to make a difference in this world. I know this is a theme because I have already read five of the books so far this year and I have another seven on my Cybils reading list. In my mind twelve out of 89 books makes up a theme.

At any rate, Resist by Veronica Chambers is an easy to read book targeted at younger teens or tweens highlighting the lives of 35 people who stood up and did something for the betterment of mankind or to draw attention to something that needed to be corrected. I suppose that the goal is for a teen reader to pick this book and decide that if these 35 people could do XYZ, they, too, should have the courage to do the same. Each section covers a very brief biography of the person and their accomplishment as viewed through the lens of the trials they had to endure along the way. At end of each section there is a bolded resist lesson. For example, the chapter on the Lalai Lama ends with, Resist Lesson---The People who want to do good are the real majority. Troublemakers make up just a handful of all the people in the world.

The book begins with an inspiring forward introduction by Senator Cory Booker. He tells the story of a young lawyer, Arthur Lessman, who was inspired to help the civil rights movement but couldn't afford to go down to the south to march and protest. Instead he stayed home in New Jersey and volunteered his services to assist the Fair Housing Council. Years later, because of his services, Booker's family was able to buy a home in an area which up to that point had not been open to black families. Because of Lessman, Booker was able to grow up in his beloved neighborhood which would not have happened without the Fair Housing Council's help.

I zoomed through this book, out of interest and because of it's easy to read format. It took me less than an hour to read. Many of the highlighted persons I was familiar with their stories, so I didn't need to linger long to get the point of what they did to make the world a better place. Younger readers may not be as familiar with many of the included persons. It started with Joan of Arc, Galileo, and Susan B. Anthony and included many names one expected to see---Martin Luther King, Gandhi, Oskar Schindler. And finished up with individuals who are still living like Rev. Dr. William Barber, the founders of Black Lives Matter, ending with a note from the activists from Marjorie Stoneman Douglas High School about gun safety. I liked that the book had a historical and a current feel about it.

One hero, who I'd never heard about was Chinune Sugihara. He taught us that sometimes you break the rules to do what is right. He was a Japanese man living in Lithuania at the consulate at the time WWII broke out. When he learned about the atrocities concerning the Jews, he started writing visas for Jews who wanted out of the country. Even when Japan recalled him, he kept writing as many as her could, as fast as he could until he ran out of paper. He was later punished by his government for what he did but he learned later that his actions saved 6,000 Jews from the Nazis!

I liked the book, though I often felt that the five or six pages dedicated to each of the thirty-five people was far too few to really explain everything they did and stood for, but I had to think back to the target audience... young teens not cynical adults!

Look for this one at your nearby library. If they don't have it in their collection, encouraging them to get it.


You may only be one person, but you have the power to change the world.

Posted by Anne@HeadFullofBooks at 1:56 PM