Since I am attempting to read 89 nominated nonfiction HS/JH books before the end of December I don't really have the time to give each one I like a full review. but I wanted my readers to be aware of these books and to look for them at your library or a bookstore near you. 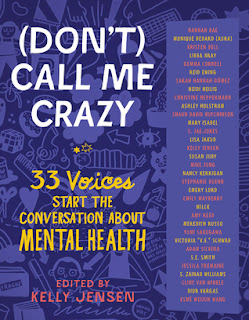 There is a plethora of "these types" of books published this year. Honestly if you are a young adult author and haven't been asked to submit an essay for one of them one will wonder if you are popular with your peers. (Just kidding.) That said, this book distinguished itself from the others by the quality of the writing. Though I didn't read every single essay, I read about one third, and each was spectacular. The best, I thought, was the first "Defying Definition" by Shaun David Hutchinson. He reminds/tells the reader that he refuses to be defined by depression. His concluding sentence sums up the essay nicely, "Define words, not people. Define 'depression,' but don't define others by it. Because we are people and we defy definition" (7). Some of the other essays were about the authors' struggles with mental health issues I didn't even know had names, like compulsive hair-pulling (trichotillomania) and being aware of and disturbed by noises made by other people, like chewing sounds (misophonia.) Even if a mental health issue isn't conquerable, it is comforting to know that others struggle with the same thing---that you aren't alone.

Among the many essays on depression, suicidal-ideation, OCD, drug/alcohol addiction there were also essays on related topics like the top movies and fictional characters related to mental illness. One character, Vicky Cruz from The Memory of Light by Francisco X. Stork, is very memorable. She wakes up in the "after" of her failed suicide attempt. As the story unfolds we learn that there is no magic pill to make a person better but with hard work and understand one can come to a point of being relieved that they are alive.

The book also had submissions from graphic authors/illustrators. My favorite is called "Tearing Feelings Apart" where the artists helps the readers imagine what would happen if all the words that make up your sad feelings are so far apart that they are inhabiting another planet or universe where they are happy. Very creative.

When the Cybils judging event is over for 2018, I want to revisit this book and read the other 20 essays that I missed first time around. It is that good. Now I will close with a meta-meditation I learned from the book: "May I be well. May I be safe. May I be happy. May I be healthy. May I live with ease." Now I do it again but this time insert the name of someone I care for; someone I am struggling with; the country, etc. (57)

They Lost Their Heads: What Happened to Washington's Teeth, Einstein's Brain, and Other Famous Body Parts
By Carlyn Beccia, Published by Bloomsbury
Target Audience: upper elementary, middle school or junior high students
182 pages, including an index, selected bibliography, source notes and a table of contents. 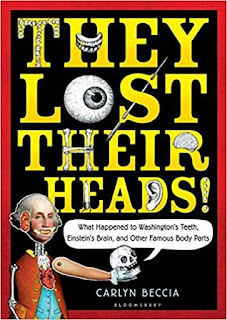 Ho ho. What fun. Everything about this book is fun, or funny, or gross, or just plain interesting. As you can tell from the title that it has a lot to do with body parts, and in a lot of cases we are talking about dead body parts. I am pretty sure that people from past centuries weren't as grossed out by the idea of dead body parts as I am because so many of them stored skulls, brains, legs, warts, and even eyeballs instead of burying with the dead owner of said body part. Don't they stink?

Here are a few highlights that you might not know. When Pedro 1 ascended to the throne of Portugal tried to hold a coronation for his dead wife so she could be queen. He dug up her skeleton, dressed it up, and made his subjects kiss her hand. // A few pieces of Beethoven's hair were saved by a young boy. It survived in a wooden locket. The locket made several journies to keep it safe from the Nazis when finally in 1994 someone bought the locket and hair at auction and had it analyzed. to everyone's surprise Beethoven had been poisoned. Lead poisoning to be precise. // Some counterfeiter's hatched a plan to steal Lincoln's body after he was entombed in a fancy sarcophagus. Shockingly body-snatching wasn't illegal at the time. // Some people thought that death was contagious. After a mother and two daughters died roughly in the same period, everyone was worried that the son would catch the death, too. So they dug up the three females to see which one was killing him. One, Mercy Brown, was not as decayed as the other two, so they thought she was killing her brother. (They never used the word "vampire.") // Albert Einstein wanted to be cremated after he died. And he was...except for some of his body parts. His brain has actually been dissected to examined many times to see if anyone can figure out why he was so smart.

The book is filled with fun and entertaining illustrations to coincide with the factoids and short accounts of what happened to the famous people and their body parts. I think this would be a perfect book for a young teen or preteen boy. It is a quick read with lots of gross facts, the kinds they can tell their friends about. I loved the book and though I meant to read only a portion of it to make my judgment for the contest, I couldn't keep myself from reading the whole thing. 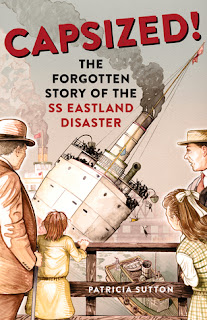 On July 24, 1915, the SS Eastland, filled to capacity with 2,500 passengers and crew, capsized in the Chicago River while still moored to the pier. Happy picnic-goers headed for an employee outing across Lake Michigan suddenly found themselves in a struggle for their lives. Trapped belowdecks, crushed by the crowds attempting to escape the rising waters, or hurled into the river from the upper deck of the ship, roughly one-third of the passengers, mostly women and children, perished that day. The Eastland disaster took more passenger lives than the Titanic and stands today as the greatest loss of life on the Great Lakes. Capsized! details the events leading up to the fateful day and provides a nail-biting, minute-by-minute account of the ship's capsizing. (Book blurb)

The book is very readable. I read it in just an hour or two. The circumstances of the day were remarkably detailed, not lost to history. From the time that the ship started loading its passengers until it rolled over, trapping and drowning over 800 people, was only a half hour. It is a incredible and disturbing story. One that shouldn't be forgotten.

At the end of the book, the author raises some critical-thinking questions for young readers to ponder. She asks, "Why do you think that this disaster got so little historical attention compared to the Titanic, even though more people died in this disaster?" Good question. One that would be worthy of a good class discussion. I recommend this book for middle school students who have to read a book about American history. It will thrill them and impress their teacher.

Three good books. Ask for them at your library!

Posted by Anne@HeadFullofBooks at 7:16 PM