A re-review of READY PLAYER ONE 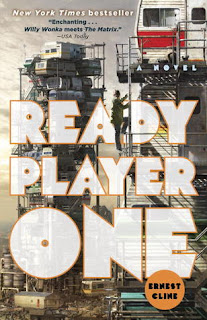 This past week I re-listened to one of my favorite books, Ready Player One by Ernest Cline. Since I did a re-listen it seems appropriate that I write a new review, a re-review, if you will.

My first time through Ready Player One was during the summer of 2012. At the end of that school year a math teacher stopped by the library and told me about a book he thought was just great. I immediately bought it for the library and got myself in line to the listen to the audiobook, available at the public library. The math-teacher-book-recommender was correct, the book was great. It became my go-to book to recommend to students and other folks that year.  In fact, I am pretty sure that I gave it to all my nephews for Christmas that year.

In case you haven't heard, Ready Player One is probably the most geektastic book ever written. It also is crammed full of pop-culture references to the 1980s, especially those related to television sitcoms, Rock and Roll music, and early video games. Now before you dismiss this book because you don't consider yourself a video-games, dungeons-and-dragons, Star-Trek-loving geek, neither do I, but this book just knocked my socks off.

Wade Watts, the story's protagonist, escapes the reality of his life by spending as much time as possible in the virtual reality utopia called OASIS.  Prior to the death of the creator and founder of OASIS, he sets up a competition where the winner will inherit his fortune. The winner is the person who discovers the "easter egg", a Willy-Wonka-golden-ticket type of prize, he has hidden somewhere in the OASIS.  Contestants must find several keys to get past gates and they do this by solving puzzles, playing video games, and knowing period trivia. At the end of all the gates is the prize. Naturally, as in all good books, there is a villain, this time in the form of the evil corporation IOI. If IOI wins the competition it will wreck the free OASIS for everyone else. Gunters, or individuals like Wade who consider themselves computer/OASIS nerds, are trying to get to the prize before anyone from IOI. The competition is fierce, evenly deadly.

The author, Ernest Cline, describes himself as "a screenwriter, spoken-word artist, and a full-time geek." It really shows that he knows what he is talking about when he describes the various games, song lyrics, and movies of the 1980s...He says READY PLAYER ONE is the geekiest book every written. I agree.

I listened to the audiobook of Ready Player One narrated by Wil Wheaton. He did an exceptional job. He has one of those voices that are really fun to listen to... I recommend this audiobook if you are looking for a fun book to listen to.

Obviously I was quite excited about the book after my first time through it. But after six years, a lot of the story had faded in my memory. When I learned that a movie based on the book was coming out is out (it hit the box offices on March 30th) I decided to reread the book as a refresher before going to the movie. My daughter, independent of me, decided the same thing and re-listened to Ready Player One last week, too! If possible, I think the book is even geekier than I remembered it. There are so many references to 1980s pop culture it is a little overwhelming. 1980s wasn't my decade to explore all the pop culture so most of the references skimmed over my head with only vague recollections on my part. But that did not diminish how much enjoyed the book the second time around. All the adventure and excitement were still there. The creativity of the writing was  still fresh and new. I had forgotten enough of the specifics I could still be surprised and delighted. I even cringed and cheered as if I didn't know what was coming next, because I sort of didn't. Ha!

Now, about the movie. I haven't seen it yet but the trailers make it look vastly different than what I picture in my minds-eye. So different, in fact I did an Internet search to see what others think of the book-movie comparison. In Collider, Perri Nemiroff says, "Steven Spielberg’s Ready Player One is..an extremely condensed iteration of the Ernest Cline epic. Think bite-sized candy. You may not get to indulge extensively, but it’s got the same flavor, offering up a new way to digest the same themes, concepts and revelations."

Okay, I like bite-sized candy. I understand that the book is too long to take all parts into a movie, so I am willing to give the movie a chance. But I am betting that the book is better. Books are almost always better than films. But just the same, I will bet you a bite-sized candy bar that you will wish you read the book first before seeing the film. Two times through it and I still love it. Read it today!