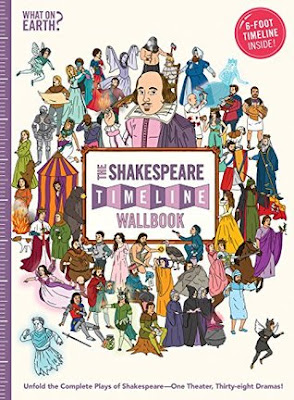 Back in November of 2017 I was frantically attempting to read all the nominated nonfiction titles for the Cybils Award. I was a judge for the first round of judging. I attempted to get all the books I could from my public library but those that my library didn't have had to be supplied by the publisher. With over 60 books to read, I didn't fuss too much if I couldn't find a book because there were plenty to of others that I could find and they kept me busy. Finally in late November and early December the books from publishers started to arrive and I had a hard time giving them more than a cursory glance just to meet my deadline. But I have kept those books and am trying to finish reading them now so I can honor the publishers that sent me the free copies.

The Shakespeare Timeline Wallbook by Christopher Lloyd and illustrated by Andy Forshaw is one of those books that didn't get my full attention because it arrived so late in the judging process. And what a shame, too, because the book is a treasure. It took me only an hour to read once I sat down to read it and I enjoyed it very much.

The book includes a huge, 6-foot long timeline of all 37 of Shakespeare's plays. The timeline could be detached from the book and displayed on a wall. Each play has a brief summary (one short paragraph) and two or three themes of each are highlighted. The print on the timeline is tiny so if a student wanted to learn more about each play they would have to stand really close to the poster. See the photo of a portion of the timeline below. 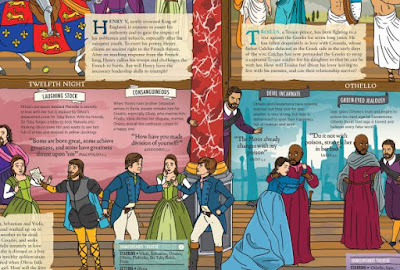 The next portion of the book is put together like a newspaper with articles about important aspects of Shakespeare's life and influence, interpretations of the play over time, and other interesting tidbits. For example, I learned that Tchaikovsky, the famous Russian composer, donated his skull to be used in performances of Hamlet. And Charles Dickens, another famous British author, saved Shakespeare's birthplace from being dismantled and moved to America by PT Barnum. It is now restored and safely still situated in its rightful place in Stratford-upon-Avon.  These little articles were very clever and were dated so the reader could learn when the event occurred. Researchers are still discovering new things about Shakespeare today! Did you know that researchers recently dug up the bones of Richard III, who Shakespeare described as a hunchback, but few believed that he was. Well, the bones, discovered in 2012, show that Richard indeed did have a "crookback", as Shakespeare described it. 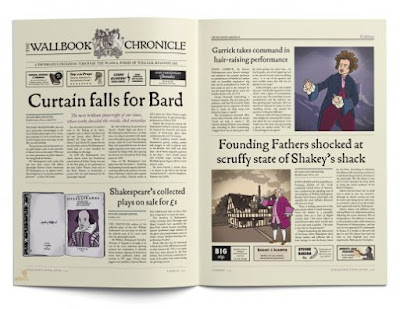 The last three parts of the book include samples of Shakespeare's sonnets, lists of words and phrases that he coined, and a quiz, which I failed spectacularly.

I really, really like this book. It is clever and fun. It is a quick read yet is full of interesting tidbits. The timeline is hardest for me to read because the print is so small, but if it were larger the whole poster would be unwieldy.  I want to keep the book, for selfish reasons, but know that I should donate to a school library or to an English teacher who will make it available for student use.

If you ever see this book at your public library, check it out and then give yourself an hour or two to delve into it. It would also make a tremendous gift for an English teacher or just someone who loves everything Shakespeare. Though it doesn't have many pages, 24, it is packed with information. The size, 15 inches tall (36 cm.) may be too tall for regular library shelves so it may be hanging out in the oversize section of the library. Ask your librarian for help finding it.

Apparently The Shakespeare Timeline Wallbook is part of a series of Timeline Collections. Other books in the series are: Big History; Nature; Sports; Science; and this one, Shakespeare. I will look for the other books, too.

I reviewed this book from a complementary copy supplied by the publisher,  What On Earth Publishing. This review is an honest and open review of the book by me.