The Librarian of Auschwitz by Antonio Iturbe 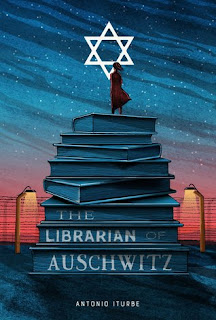 The Librarian of Auschwitz by Antonio Iturbe is one of those disturbing Holocaust stories set mainly in the infamous concentration camp in Poland--- Auschwitz. And remarkably, it contains new information. Information based upon a real-life remarkable girl, Dita Kraus. When she was fourteen she and her parents were transferred by the Nazi’s from the Terezin ghetto to the Auschwitz family camp. Apparently the Nazi’s schemed on a plan to trick the Red Cross by placing a few hundred Jewish members in a family camp and allowing the children to attend school. If the Red Cross came to the camp, the Nazis could show them how humanely they were treating families by allowing them to be together and by allowing the children to go to school.  It was in this school in Block 31 that Dita became the librarian of eight precious and illegal books. The Nazis supplied nothing for the school but did allow some adults to teach the children music, patriotic games, etc. If they knew about the books a lot of people would likely be punished. Dita had to be very careful.

The books were a rag-tag collection of works: one atlas, a Russian grammar book, a geometry book, and a few novels, including one by H.G. Wells, and another, The Count of Monte Cristo, published in French. No matter how odd the collection, the books were checked out by the teachers so they could teach students certain concepts.

The school and time spent in Block 31 was a respite for Dita, the teachers, and for the children. Daily life was so terrible. Survival was a struggle for everyone, though even in the worst of conditions, children find ways to have fun and to be silly. In one scene a group of children, led by a brash ten-year-old, made a raid on the kitchen hoping to get potato peels for a snack. “Adults wear themselves out pointlessly searching for a joy they never find. But in children, it bursts out of every pore.”  Death was just a breath away at all times. This time ended good for the participants, but it could have ended badly. One day, one half of the family camp prisoners were put to death, nearly 3000 souls gone in a day. It is too terrible to even think about.

Yet, somehow, Dita and her mother survive even after the school is closed and they are transferred to several other camps within Germany. They survived to realize freedom as the British soldiers rescued their camp. Later Dita married a boy she met in Block 31 and they settled in Palestine in 1949. It was a happy ending to a horrific life.

I had the worst high school education on the topic of world history. As I look back on my education, it is a wonder I know anything at all. I never even heard the word "holocaust" until I was in college, and when I did hear it I had to pretend I knew what it meant until I had a chance to look it up on my own. I did read The Diary of Anne Frank in junior high but I don't recall the teacher ever using the word "holocaust." After college I read The Hiding Place by Corrie ten Boom. It wasn't until years later that I read Elie Wiesel's Night, which was one of the first first hand accounts written by a survivor of a death camp. Since then I have read several other books on the topic, including information books, and felt that I had a pretty good handle on the horrors of the Holocaust. then along comes The Librarian of Auschwitz by Antonio Iturbe. I am shocked to learn that Auschwitz, the worst of all the camps, actually had a little school and there was a girl who was the keeper of the books...a librarian for the smallest collection ever. “Each time someone stops to tell a story and children listen, a school has been established.” It makes me cry to think of the simple beauty of holding and reading a book amid all the suffering and horror of the camp.

As moved as I was by the book, I found it a difficult book to read. One reason is obvious. It is hard to read books about such terrible event, especially knowing that they happened in a similar fashion in real life. The second reason, I thought the book to be a bit flat in its ability to convey the feelings of the prisoners. I suspect that this is a translation issue. Antonio Iturbe is Spanish and he wrote the book in his mother-tongue. It was translated by Lilit Thwaites, a former professor from Australia. My limited experience with translated works is that they often come across a bit flat. The nuances of the language are lost in translation. And my last issue with The Librarian of Auschwitz was the length of the book. At over 400 pages, it seemed to go on endlessly...but then there was a lot of story to tell. It took me a long time to build up enough of a head of steam to finally push past the half-way point and then I was able to complete it quickly from that point on. My favorite bits of the story talked about the value of reading and of books. They have real power to save and to make the world a bigger, better place.

“Throughout history, all dictators, tyrants, and oppressors, whatever their ideology - whether Aryan, African, Asian, Arab, Slav, or any other racial background; whether defenders of popular revolutions, or the privileges of the upper classes, or God's mandate, or martial law - have had one thing in common: the vicious persecution of the written word. Books are extremely dangerous; they make people think.”

The end of the book has a biography of "What happened to..." some of the real people referenced in the book. I was dismayed that Dr. Mengele was never found after the war and died of natural causes in Uruguay where we was living in hiding. As of the printing of this book Dita Kraus is still living in Israel but she often returns to Prague, her first home.

Note: all quotes used in this review are from The Librarian of Auschwitz, unfortunately I couldn't supply the page numbers as my source (Goodreads) didn't list them.