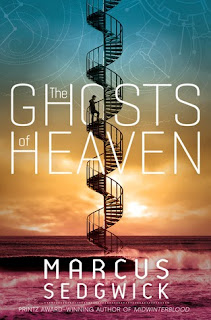 Marcus Sedgwick is one of the most talented YA authors alive today. The guy can write! And his books are so inventive they make almost every other book seem humdrum or just plain ordinary in comparison. Two years ago Sedgwick won the Printz Award for his book Midwinterblood. In that novel of seven interwoven stories, traveling backwards in time, take the stories of Merle and Eric whose souls have been searching for one another for hundreds of years. Each of the seven stories occur on the date of a special moon (harvest moon, harvest moon, blood moon) and just when the two lovers recognize each other something happens and that story closes. Sedgwick got the idea for the book after he viewed the painting called "Midwinterblood" by artist Carl Larsson which hangs in the Swedish National Museum.

Two or three years before Midwinterblood, Sedgwick's book Revolver was honored by the Printz committee.  In this psychological drama a young boy sits alone in a frozen cabin with the corpse of his father and his father's killer. His only protection is the colt revolver. The gun is so integral to the story it seems to become a third character. The writing is so taut one can feel the tension through the pages of the book.

Now in 2015 Sedgwick gives us another completely unique book in The Ghosts of Heaven. Goodreads refers to the book as genre-bending and I would agree. Is it historical fiction or science fiction? Or perhaps it would better be described as horror fiction. Whatever it is, it is different. Four linked stories chronicle obsession and madness. Are there ghosts or not? The reader never knows. A common thread that runs through all the stories is the spiral pattern. This pattern is ultimately an endless design so it carries it's thread through time for prehistoric days when the main character starts thinking about the possibility of a written language, through the witch hunts of the 17th century, an insane asylum in the early 20th century, and finally many years in the future aboard a spaceship which is traveling in a spiral pattern to seek out new worlds for habitation. Readers are instructed before the first chapter that they can read the stories in any order they like. I didn't try it, but now my mind is working on how different that would have made my experience with the book.

The book was a fast read for me, taking less than a day to read. While I was in the middle of it I was already betting myself that this book would be in solid competition for the next Printz Awards. Once again Sedgwick has given us a book that has broken down literary barriers in design and creativity.
Reviewers from the NYT and the Guardian weren't so sure that the book was his best as they both felt it left the reader dangling a bit too much; left too many ideas up in the air. I can see their point but disagree on the criticism. One of the reviewers (I can't remember which and I don't feel like going back and checking) said there were other books which did the interconnected-stories-through-time thing much better and then used adult books as examples to prove the point. Hello! That is not even a fair comparison. By the very definition of YA literature, less characters and less complicated plots, it is not fair to compare. If that reviewer had cited another YA novel then I would look at his crticism more seriously.

Honestly, I really liked the book and will recommend it to my teen readers and will add it into the mix for our Mock Printz list of books come Fall. It has also caused me to look for spiral shapes everywhere I go. Pictured below is a fiddlehead fern my husband found in Alaska when we were there last week.

Posted by Anne@HeadFullofBooks at 5:58 PM