Summaries and a few thoughts

Quite often I read books for which I don't really want to write a whole review but I do have a few thoughts. Today I decided to jot down a few of these thoughts.

Imagined London: A Tour of the World's Greatest Fictional City by Anna Quindlen.
Quindlen takes a trip to London and visits or attempts to visit places described in books by by famous London authors.
Having read several books by Quindlen in the past and being a person who considers herself a reader I thought this would be the book for me. But I learned that a) I haven't read as much British literature as I thought and b) it has been so long since I've been in London I couldn't really picture the places she described. Now I am resolved to read something by Dickens, which has been a goal for several years, and to visit London again. (I went to school in London in 1979 for a term. I'm sure things have changed a lot.)
Ms. Quindlen writes the following in her "Acknowledgement" pages. Having just finished The Woman in White, I feel the same about classic literature in general.


I could not imagine living life without the writers mentioned in these pages. in a world that seems increasingly senseless and graceless, they bring intelligence to bear on the human condition. 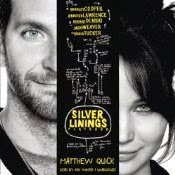 Silver Linings Playbook by Matthew Quick
Having seen and enjoyed the movie Silver Linings Playbook and having read several other books by Matthew Quick I looked forward to listening this audiobook. A future book club selection, I jumped to check it out from the library when it became available.
Who wouldn't want to read a book with this promo line: "An enchanting first novel about love, madness, and Kenny G." Here is proof why someone should always read the book before seeing the movie...they aren't identical. Instead of being delighted with the differences I was disappointed that a few of my favorite scenes in the movie weren't actually from the book or were so changed as to be almost unrecognizable. If I had read the book first the criticism would have run the other direction.
In the movie Pat Peoples, the main character, is a very fit but mentally unstable man coming to terms with his life. In the book, at least the audiobook, it felt like Pat Peoples was not just mentally unstable but maybe mentally handicapped or even autistic. Those differences vastly changed the tone of the book for me. I'm curious to see if other readers feel the same way.

The Best Exotic Marigold Hotel by Deborah Moggach
Another book I read AFTER seeing the movie, (which is not a good idea) I kept picturing the faces of beloved actors, Judith Dench, Maggie Smith, Dev Patel, and trying to match them up with the characters in the book even though they didn't match exactly.
In the book the owner and proprietor of the Best Exotic Marigold Hotel is an older gentleman who is married to a woman who is bitter and angry. He is miserable with his living arrangement but still very gracious to his guests.  In the movie, if you've seen it, you know this character is played by Dev Patel, a young Indian man who is trying to make something of himself and to impress his mother and girlfriend. Death plays a much more prominent in the book where folks in their 70s are so OLD they must be ready to die at any second. Sigh.
Another audiobook selection for me, I sure enjoyed the way Juliet Mills read it. She did both the British and Indian accents so well.

Becoming Billie Holiday by Carole Boston Weatherford
I hold a weird fascination for celebrities whose lives didn't end well. Billie Holiday is one of those celebrities. Holiday was extremely talented so one has to wonder why she squandered her talent on drugs and alcohol. I thought this book, written in verse for a younger audience, would appease my curiosity. And to some degree it did. But it also left a whole lot of unanswered questions in my mind.
This book was donated to my high school library by an elementary librarian in the district who felt the subject matter was too old for her audience. I took and processed the book, placing it on the shelf without really looking at it. As I was doing inventory this Spring I pulled it out to decide if I should even keep it. After reading it I decided that the book wasn't really too old for an elementary audience, it is just too difficult to pull out information when it is written in verse. Don't get me wrong.  I liked the poems. They were well-written and lyrical. It is just that when a book is about a person who really lived and the poems are about actual events it renders the information a bit inaccessible. I am still trying to decide if I will weed the book from library or not for that reason. should probably just move it over to the poetry section and allow reader to discover its beautiful poems and lovely illustrations.
Sample poem from the introduction---

What Shall I Say?
The way mama toted around
that magazine with my photo inside,
who'd have thought
I was Woman of the Year.
I don't blame Sadie. Wasn't every day
that a colored face, let alone
her only child, appeared in Time.
I was so proud too til I read
what that two-bit critic wrote.
Called me "roly-poly"; said I wouldn't diet,
was stuck on my own voice,
and cared for tunes but not the words.
What did he know
about my taste in food or music?
....

Posted by Anne@HeadFullofBooks at 11:55 AM