The Woman in White by Wilkie Collins...update, the last. 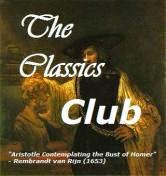 A little over five weeks ago, on April 6th, I participated in the 9th Classics Club spin. The rules were fairly simple: write down and number 20 titles of classic books. The books should represent not only books that one thinks would be easy to read but also should include books one considers a challenge. The spinner stopped on #2 which meant my selection was The Woman in White by Wilkie Collins.

At first I was fairly anxious about the book. All I knew about it was it was a mystery and, after picking the book off the shelf, that it was long, over 600 pages.

After setting myself some weekly reading goals, I did a bit of research about the author and his writing style.The Woman in White is one of the finest examples of sensation fiction, "– a genre distinguished by its electrifying, suspenseful, and sometimes horrific plots, as well as its unsavory themes of intrigue, jealousy, murder, adultery, and the like –"(Guardian) very popular between 1860 to 1880. The sensation genre draws on aspects of several different genres of novels: horror, Gothic romance, mystery, and detective novels. Though perhaps a bit tame according to today's standards, The Woman in White did indeed cause quite a sensation when it was first published in 1860 both in Britain and in America.

I was delighted to learn that Collins, who was a friend and contemporary of Charles Dickens, first had The Woman in White serialized in Dickens' weekly literary magazine. Apparently readers lined up to buy each next issue to find our what would happen next. Descriptions of the public's reaction to the book reminded me of the craze over Harry Potter a few years ago. The Woman in White became a marketing sensation with clothing, household items, and toiletries all created to take advantage of the book's popularity.

I don't know what portion of the book was written before the first installment was published in the literary magazine but I do know that Collins was a master of the cliff-hanger. I frequently didn't want to stop reading at my self-imposed 20 pages a day and I was eager to get back to the book the next day to discover all the twists and turns in the plot. The pacing couldn't have been better.

In 2010, in honor of the 150-anniversary of The Woman in White, a project was put together to digitize the original installments of the book from the literary magazine, All the Year Round in Britain and the original artwork from Harper's Weekly, its counterpart in the United States. I enjoyed looking around the site and reading a bit of the story in its original format.  Take a look at the project here.

Though The Woman in White didn't make it on 100-books-to-read-before-you-die list, I did find it in 501-Must Reads, a book about books that one must read. Ha! The only difficulties I encountered reading it were bits where the riff-raff were speaking and their dialogue was written in vernacular. Not being British myself (or living in the 1860s) I often couldn't read these parts word-for-word but I could understand the main points made by the characters.  This didn't happen often so I am not sure it is even worth mentioning. Other than this I found the book delightful and exciting, a real page-turner.

As far as plot goes I don't want to give anything away. I had no idea what the big SECRET was right up to the its revelation. Characters got what was coming to them but I never was able to predict what that would be ahead of time. I was continually left on the seat of my pants which made me run back to the book and even squeeze in some reading time at work. All-in-all I was quite delighted with A Woman in White and will recommend it to strong teen readers who are assigned to read a piece of classic literature.

One more remarkable thing happened to me with the reading of The Woman in White: I overcame any residual fear of tackling the classics. As I closed the book I felt my brain opening to new reading possiblities. What's next for me: Middlemarch, Great Expectations, East of Eden, The Sound and Fury? Who knows, but I am ready.

The original was first published in All the Year Round, a literary magazine, from Nov. 26, 1859 to August 25, 1860, in 40 serialized installments. (Simultaneously published in Harper's Weekly in the US.)