The Woman in White, update, the fourth. 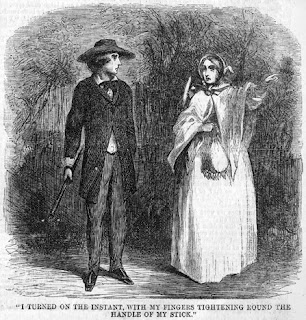 Classics Club Spin #9, fourth update on progress
Book: The Woman in White by Wilkie Collins
Pages read: 544 of 609.
Weekly goal: I have a little over 60 pages until the end. I managed to read over 20 pages every day and some days I read many more pages than that, not being able to stop myself.

In 2010 there was The Woman in White 150 years anniversary of publication project. The project included:


PREFACE
AN experiment is attempted in this novel, which has
not (so far as I know) been hitherto tried in fiction.
The story of the book is told throughout by the
characters of the book. They are all placed in
different positions along the chain of events; and
they all take the chain up in turn, and carry it on
to the end.

What pleases me:
I reflected this morning during a quiet moment of thought how The Woman in White has returned my reading mojo. By holding myself to the 20 page a day (approximately) goal and meeting this goal I feel quite accomplished. But more than that I no longer feel any fear of the "classics." What is next for me? Middlemarch? Great Expectations? The Three Musketeers?
The action (no spoilers):
The SECRET has finally been revealed and it is a doozy. Collins did a great job doling out the action and suspense and I couldn't figure out the terrible secret that made Sir Percival so angry and defensive, and frankly, dangerous. Now that the secret has come to light one would think the last 100 pages would all be anti-climatic. No. Now we turn out eyes toward the dastardly Count Fosco.


Comments: I hope to finish up by or before Friday, a week ahead of schedule. Woot. Woot!

Posted by Anne@HeadFullofBooks at 8:39 AM