And We Stay by Jenny Hubbard 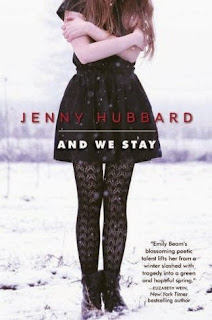 Teen issue books are quite the thing these days. Some of them seem to be just crammed full of every issue imaginable (bullying, divorce, suicide, depression, pregnancy, abuse) and characters are required to run the gauntlet from one issue to the next. And We Stay by Jenny Hubbard deals with teen issues of unplanned pregnancy and suicide with a deftness not often seen in YA lit.

Emily Beam's boyfriend Paul commits suicide during a moment of desperation. Emily witnesses the event and is obviously traumatized. When her parents decide to enroll her in a boarding school for the remainder of the year it seems like a good, sound decision. She is moved to a school in Amherst, Massachusetts, the birth place of Emily Dickinson. As Emily attempts to fit in and to adjust to her new reality she finds that poetry is practically bubbling out of her. It is as if she is channeling Emily Dickinson, the prolific American poet who wrote so many poems in her lifetime she didn't bother to name them. She just numbered them. 1775 in all.

Most of Emily Beam's poems deal with the raw issues she is dealing with. She doesn't want anyone to see these poems. But just like Emily Dickinson's poems that were published after her death, Emily Bean's poem want to see the light of day and her classmates and teachers encourage her to publish them.

The real star of the book are the poems. Through the poems the reader gains insight into the events that led up to that fateful, awful day and to the mindset of Miss Beam as she grappled with her issues.

They are each
their own
planet
and outer
space

I remember liking her poetry when I read Jenny Hubbard's first book, Rock Covers Paper. And We Stay has more poetry and it is even better stuff this time around. I suspect this is why And We Stay won a Printz Honor this past year making it one of the best books of the year. I would guess that is also drew attention of the award committee for the gentle ways it dealt with tough subjects. Emily Beam, with the help of Emily Dickinson, grew as a character and started the process of emerging out of a very dark place.

I listened to the audiobook read by Erin Spencer. It is a short book and I enjoyed it in this format.

With the completion of this book i also have completed the Printz Challenge for the year---reading all the Printz Award winning books for that year. Woot. Woot.

Audiobook checked out from the public library: Hubbard, Jenny. And We Stay. Listening Library. 2014.

Posted by Anne@HeadFullofBooks at 1:38 PM