Review: Going Over by Beth Kephart 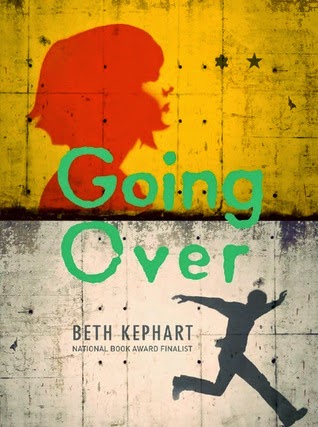 In the 1980s, before the fall of the Berlin Wall, Ada lived in West Berlin with her mother and grandmother. They were very poor, even living in a squatters apartment, but they were free. Stefan lived in East Berlin with his grandmother. They were equally poor but they were not free. They could not move about freely in the world, stuck behind the wall. Ada and Stefan's grandmothers knew each other and were friends during the war, fate stuck them on opposite sides of the wall where the visiting always went in one direction, West to East. Because of these visits, Ada and Stefan became friends at a young age, and the friendship blossomed into love as they became teens.

This love drove Stefan to want to escape to the West, a decision that could have deadly consequences. Ada urged him to jump and then wondered if she was loving him to death. Going Over by Beth Kephart is the story of two teens and the lives they live and the plans they make on either side of the wall.

The writing style in Going Over is what sets this book apart. Yes, the plot is interesting and the setting is different than any I've read before, but it is the use of second person narrative in alternating chapters that really makes it unique. Ada is the narrator of the odd chapters, told in first person. We get a feeling for what it is like living in her shoes with the anxieties in her life. The alternating chapters are almost written in a letter style, but not quite. Ada refers to Stefan as "you". Sometimes we learn a bit about the real history of people who made it (or didn't make it) over the Berlin Wall to escape the totalitarian regime. Other times we learn what preparations Stefan is making for his jump. Here are a few typical sentences from these parts of the book:


You have to know whom to trust. You have to see through the punker kid to his heart.

When you look look back over your shoulder, she's there. When you study the wall, it's her shadow.

The second person point of view is a bit disconcerting. I kept wondering who the narrator was and how they knew all of the information. I settled on Ada as narrator telling Stefan's story so that the reader doesn't know if he makes it across or not. It works, as odd as it is, as a literary device. Now I am left wondering: will the uniqueness of this technique be enough to call attention to the Printz award committee? My guess is no, but I have been wrong before. Stay tuned.

Posted by Anne@HeadFullofBooks at 8:12 PM