Review: Fourth Down and Inches: Concussions and Football's Make-or-Break Moment 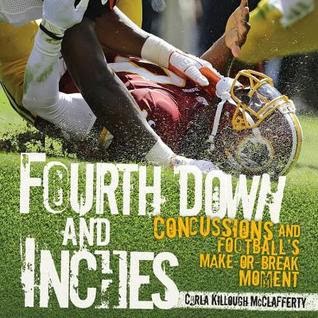 My husband, who played football in high school, loves to watch college football. He will watch it on TV every night of the week if a game is on. I always tease him that he would watch even if it were game pitting Podunk U vs. WhoCares U. To which he always replies, "It's football, and I love football." I confess that I also enjoy watching if "my team" is playing. But after reading Fourth Down and Inches: Concussions and Football's Make-or-Break Moment by Carla Killough McClafferty my feelings are really torn up about football and the potential damage it can do to the brains of the individuals who play the game.

When the game was first being played in the late 1890s a player, Von Gammon, died due to a head injury sustained during the game. Everyone was so appalled that the college, Georgia State, and the Georgia state legislature called for the end of football. The governor decided to talk to Von's mother before he signed the bill that would have ended football in the state. Von's mother said that he loved football and would want everyone to keep playing. So football was saved. Yet the death toll from football kept climbing.


"When the 1905 football season ended, nineteen players were dead and countless others were critically injured. The public was outraged. The game had reached a make-or-break moment fourth down and inches. Coaches, players, fans, and even the president of the United States had one last chance: change football or leave the field. Football's defenders managed to move the chains. Rule changes and reforms after 1905 saved the game and cleared the way for it to become America's most popular sport. But they didn't fix everything."(Goodreads)

Today football faces a new injury crisis as bad as was faced back in 1897 and 1905. Concussions caused by blows to the head during the game can and do have lasting effects on the lives of the players. Researchers are finding that the damage done by repeated blows to the head, even if the player didn't sustain a classic concussion, can lead to depression, dementia, ALS, and CTE (a degenerative brain condition) and even Alzheimer's disease. Even with new and better equipment and helmets the brains of millions of young football players across the country are at risk..

Just a minute ago, as I sat at my desk in the library reading this book, a student came in who had received a concussion in one of our school's football games. He was so bad that he had to go on total brain rest for two weeks: no TV, videos, music, anything. I asked him what he did during that time and he told me that honestly he can't remember.. He thought he slept but his mother told him that he just sat and stared. How frightening.

The book looks like a children's picture book by its size and the quality of the paper but I am hoping that my high school students will pick it up and read it anyway.  It is chock full of important and frightening information about head injuries and football. I highly recommend all football lovers and anyone who is interested in sports safety read it . NFL players have started suing their old teams for making them play even though they had a concussion. The issue of safety in football appears to be just heating up. I'm not so sure that all football lovers will be pleased with what the book has to say because it really challenges the status quo. It truly is "a fourth down and inches" moment for football as we know it.

Posted by Anne@HeadFullofBooks at 2:26 PM