A Farewell to Arms by Ernest Hemingway...a compare and contrast exercise 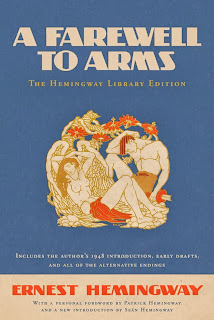 Having just finished Hemingway's A Farewell to Arms this morning while holding my nose I decided to see what other reviewers had to say about it. I found the original New York Times book review written by Percy Hutchinson on September 29, 1929. I also read a Washington Times book review written by Martin Rubin on August 3, 2012 on the occasion of Scribner reissuing the book with the original book cover.

Obviously, I am not a fan. Someone who liked the book or is a Hemingway fan, I'd love to hear from you.

Disclosure: A Farewell to Arms on Books on Tape, read by Alexander Adams; checked out from the public library.

Posted by Anne@HeadFullofBooks at 4:47 PM