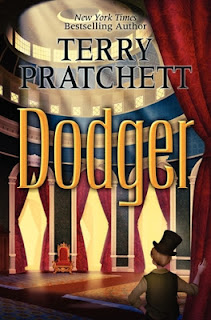 Dodger is a delightful and funny novel by Sir Terry Pratchett. Dodger is a departure from the Discworld series and this novel has a definite upbeat feeling about it even though it deals with a very serious subject---life and poverty in Victorian London.

Our hero, Dodger, could easily be Dicken's Artful Dodger, an upbeat but very streetwise kid. In fact, Charles Dickens is a character in this tale. Dodger is an orphan who makes a living by toshing, or going down into the sewers looking for coins and other treasures. When asked by Henry Mayhew if he likes toshing, Dodger answered that it does give him quite a lot of freedom. Mayhew, as you may or may not know, was the sociologist who wrote the book about the deplorable conditions of the working poor in 19th century England. Pratchett not only included him as a character in the book but he even dedicated it to Mayhew.

Dodger is quite an optimist considering the awful living conditions that confront him. He does try to mind his own business at all times but can't help getting involved when he witnesses two men beating up a young women. This act of heroism changes his life and brings him to the attention of many famous people including Prime Minister Disraeli and Queen Victoria.

Pratchett's style is so down to earth and funny that I would find myself suddenly laughing out loud at his word choices or notes of sarcasm. For example, a doctor gives Dodger a "cursory look with quite a lot of curse in it." Pratchett's explanation at the end of the book about his word choices and and use of slang was not only helpful but downright hilarious. It felt like he was was just joking around with me personally.

My husband and I listened to this book artfully read by Stephen Briggs. Here's a shout-out to Briggs. He does a great job.

Posted by Anne@HeadFullofBooks at 9:12 PM