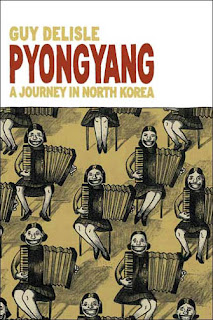 Graphic biography Pyongyang: a Journey in North Korea by Guy Delisle gives a rare view into the bleakness of life in North Korea today. It is hard to imagine a country more stuck on itself and more removed from the rest of the world. Guy Delisle spent several months in North Korea working as an animator. As a rare foreigner he witnesses it all first hand. He was not allowed to go anywhere without a guide, only a few floors of his hotel had electricity, photos of Kim Jong-Il were everywhere, and boredom was a big part of his reality there.


"North Korea is the world's most isolated country. Foreigners trickle in. There's no Internet. There are no cafes. In fact, there's no entertainment. It's hard to leave the hotel and meeting Koreans is next to impossible."

Indoctrination, propaganda,  building projects half finished, shopping malls with no electricity, no North Koreans allowed to leave the country unless they leave behind a spouse and children. All the stuff that we think of when we think of countries led by dictators but weirder and more extreme than most would imagine.

Here is a panel from the book that Guy Delisle drew after a visit to special school where all the little girls were laboring over some task and the group playing accordions all had plastered on smiles. 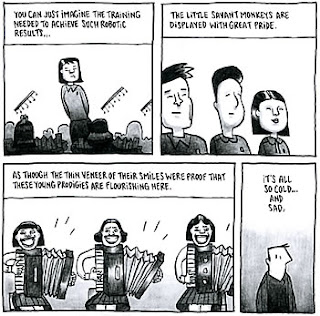 Reading about a tedious subject in the graphic novel format can transform the information into fascinating stuff, possibly even allowing for a bit of humor. Though it took me rather longer to read this book than expected, I did enjoy it and learned a bit a long the way,

Posted by Anne@HeadFullofBooks at 10:49 PM