Review: Why We Broke Up by Daniel Handler 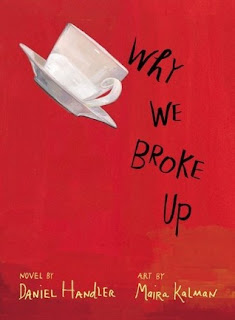 I'm telling you why we broke up, Ed. I'm writing it in this letter, the whole truth of why it happened.

Min Green and Ed Slaterton are breaking up, so Min is writing Ed a letter and giving him a box. Inside the box is why they broke up. Two bottle caps, a movie ticket, a folded note, a box of matches, a protractor, books, a toy truck, a pair of ugly earrings, a comb from a motel room, and every other item collected over the course of a giddy, intimate, heartbreaking relationship. Item after item is illustrated and accounted for, and then the box, like a girlfriend, will be dumped. ---Goodreads

Why We Broke Up by Daniel Handler is the book that anyone who has ever been dumped and had their heart broken wishes that they could write. It is the last letter and the exclamation point at the end of that letter. It says what the heartbroken one always wants to say but never has the chance. It is a rant, a prayer, a song, a final goodbye. It contains the tears and the laughter and a "how-could-you" all wrapped up in one document. It is a powerful reminder that all of us, no matter how artsy, or creative, or different we are, want to be loved and to feel special.

Last week Why We Broke Up won a Printz Honor for excellence in YA lit and, in my opinion, deserved it. The first thing I noticed about the book is that it is heavy.  It looks like a typical YA novel until you actually pick it up and the thing weighs a ton. Okay, so I am exaggerating, but it really is quite heavy because it has all of the special paper required for all the creative art work. As Min writes her letter to Ed of why they broke up, there is a corresponding drawing of the item she is also returning.  Maira Kalman is the artist and I loved her whimsical and colorful paintings. Handler writes like a teenager speaks so there are often long, run-on sentences and odd phrasings that would make me pause and go back for a re-read. A few times I wasn't sure what Min was talking about or what just happened, which would also cause me to back up and try again. But instead of being put-off by this, I was charmed.  The book was fresh and creative. It was poignant and funny in turn. I am so glad that I read it and I hope you find your way to it, too.

The back cover is filled with little quips from other YA authors about a time they had their heart broken like this one by Holly Black:


"The first boy I fell in love with didn't know I loved him, but he managed to break my heart anyway."

Ed and Min's story of heartbreak may remind you of your own heartbreak stories, it did for me. Here is mine:


My college boyfriend broke up with me at the end of a college term but then had to drive me the 30 miles to my parents home.  I cried all the way. When he dropped me off and drove off to return to Portland I knew I would never see him again. The next day I left for Europe. From there I wrote him the most pathetic letter. If I could I wouldn't do anything different except the pathetic letter. I'd spare myself that embarrassment.

Posted by Anne@HeadFullofBooks at 9:51 PM