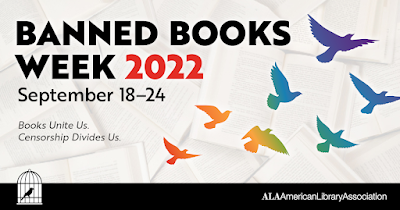 Banned Books Week used to be the hoppin'-est week in my high school library. I would make big displays which included lists of frequently banned or challenged books, like the Bible and Where's Waldo. Kids would come in prepared to do battle with me and leave with a clearer understanding of how banning books, any books, impacts us all. This year it is more vital than ever as news stories report any instances of book banning attempts as conservative, MAGA-ish parents rail against any books which are viewed as supporting LGBTQ+ students, Muslims or other non-Christian religions, anything which might make their dear children feel bad about themselves in terms of our history of slavery or discrimination. Ugh. It has been an awful year for this. Here is an article in the Washington Post, if you want more details about how book banning/challenge numbers are up in 2021/22. (WaPo)

Every year at this time I resolve to read a banned book from the ALA's most banned/challenged list for the year. But since I got a late start I've decided to give myself a pass, since I read The Complete Maus earlier this summer. It is a graphic biography about the artist's father, a Holocaust survivor. It is insane that someone thinks banning a book about the Holocaust is a good idea. Here is my review, if you want to take a look. Here are the top ten challenged books from 2021:

Often times it is parents who want to censor libraries by banning books they haven't even read! This year parents didn't stop at the newcomers but went after some stalwart classics like The Diary of Anne Frank, Maus, and To Kill a Mockingbird. Some public libraries have had to rely on donations from rich patrons to keep their doors open because city councils have decided to limit their funding because the libraries have copies of controversial books on their shelves. Gasp. 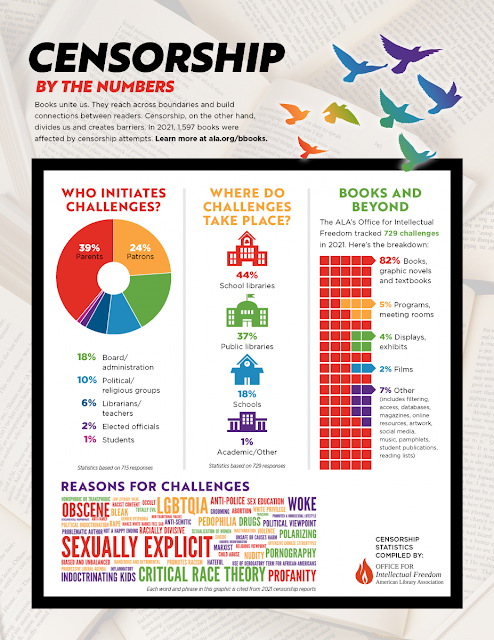 There are lots of articles about book banning and censorship this week. Find a few to read or peruse a few lists of frequently banned books. I think I will spend a little time with this one: 50 Books to Read (While You Still Can)

Here is a fun idea.  Read a banned book in a public place. Let others see you and notice the book you are reading.

Check out the resources for Banned Books Week at the American Library Assoc. webpage.