Review and quotes: GRAPES OF WRATH 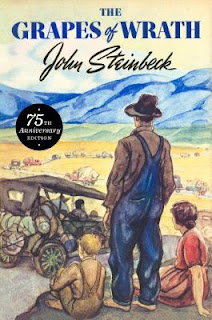 To the red country and part of the gray country of Oklahoma, the rains came gently and they did not cut the scarred earth.

Casy said, "See how good the corn come along until the dust come along. Been a dinger of a crop."

Summary: The Joad family, from Oklahoma, are forced off their farm ravaged by dust storms and poverty and by promises of work aplenty in the golden state of California. What they find there and along the way, is anything but golden.

Review: In the introduction to the Penguin Books edition of Grapes of Wrath, Robert DeMott writes,

"Given the drastic plight of the migrant labor situation in California during the Depression, Steinbeck refused intentionally to write a popular book or court commercial success. It was ironic, then, that shortly after its publication date on April 14, 1939...it climbed to the top of the best seller list and stayed there for most of the year...The Grapes of Wrath won the 1940 Pulitzer Prize, eventually became the cornerstone of the 1962 Nobel Prize, and proved itself to be among the most enduring -- and controversial -- works of fiction by an American author, past or present. Despite its gaffes, flaws, and infidelities...The Grapes of Wrath has entered both the American consciousness and conscience. Few novels can make that claim.

If ever a book gets to claim the title "literary classic" The Grapes of Wrath is it. The book has spoken to each new generation which then finds something new and relevant in it that speaks to their time. My mother, age 93, read the book when she was in high school in the l940s. She said that her mother didn't want her to read it, so she stopped by the library after school every day until she completed it. She can't remember why her mother didn't allow it, but she was determined and compelled to read it anyway, even if it meant sneaking away to do so. My sister read it in high school but somehow I didn't. How could I avoid reading one the great American novels? This year I decided to make The Grapes of Wrath my One Big Read of the year and I have finally finished it.
Steinbeck, who grew up in California and was an avowed Roosevelt Democrat, was directly involved with the plight of the Dust Bowl migrants in the latter half of the 1930s created an urge to tell their story truthfully and movingly. "This must be a good book," he wrote in Working Days on June 10, 1938.  "It simply must. I haven't any choice. It must be far and away the best thing I've ever attempted -- slow but sure, piling detail on detail until a picture and experience emerge. Until the whole throbbing thing emerges." Making people see and experience the whole picture was paramount (DeMott).
In January 1939, after Steinbeck had completed the novel but it wasn't published yet, he told Pascal Covici, "I've done my best to rip a reader's nerves to rags. I don't want him satisfied...I've tried to write this book the way lives are being lived not the way books are written...Throughout I've tried to make the reader participate in the actuality, but what he takes from it will be scaled on his own depth or hollowness." I personally feel it would be impossible to read The Grapes of Wrath and not feel empathy for the plight of these migrants, torn from their homes by forces beyond their control, invited to a state that didn't really want them, and treated like animals or worse. This book is very impactful just like Steinbeck hoped.
A very creative aspect of The Grapes of Wrath is its structure. Short expositional and background chapters on various related topics (dust, tractors, labor movements, migrant camps, etc.) are followed by long, narrative chapters about the Joad family's exodus to California. I found these short chapters of information to be helpful to my understanding and empathy. The book certainly doesn't fit into one particular genre. It could be considered a "naturalistic epic, part labor testament, part family chronicle, part travel novel, part transcendental gospel." The title comes from words the Battle Hymn of the Republic by Julia Ward Howe, which the reading audience were very familiar with, "Mine eyes have seen the glory/ Of the coming of the Lord/ He is trampling out the vintage/ Where the grapes of wrath are stored;/He hath loosed the fateful lightning/ Of His terrible swift sword;/His truth is marching on." Steinbeck certainly wrote a novel with a strong, marching drumbeat playing in its background.
I initially rated The Grapes of Wrath with 4 stars. It took me a whole summer long to read it, after all. But on reflection, I upgraded my review to 5 stars. I have thought of little else since I finished it and have struggled to think of any book so impactful as this. It might not be a cuddly, sweet story where everything gets tied up in a bow at the end, but it sure is real. The Joad family experienced pain and suffering and I was right with them throughout their whole journey. If you, like me, have lived a whole lifetime and not read The Grapes of Wrath, it is time you pick it up also.
I read and listened to the audiobook alternately. My husband even listened to several chapters with me and we found ourselves talking about how little has changed for the poor and disenfranchised of the world from 1930s to today. Sadly. I loved listening to the cadence of the Oklahoman dialect but also enjoyed seeing it written out in print. I recommend reading and listening to the story alternately like I did.

Posted by Anne@HeadFullofBooks at 11:00 AM