Review and quotes: THESE FEVERED DAYS 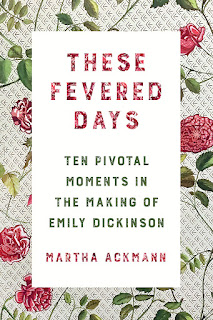 Title: These Fevered Days: Ten Pivotal Moments in the Making of Emily Dickinson by Martha Ackmann

Several poems described an aching void that she refused to identify. The mass of poems surrounding her must have looked like a disorganized workshop or the scattered production of an amateur. But nothing was further from the truth. Emily was making a plan, carving out her own route to distinction even if she would not say so directly.

On August 3, 1845, young Emily Dickinson declared, “All things are ready”—and with this resolute statement, her life as a poet began. Despite spending her days almost entirely “at home” (the occupation listed on her death certificate), Dickinson’s interior world was extraordinary. She loved passionately, was ambivalent toward publication, embraced seclusion, and created 1,789 poems that she tucked into a dresser drawer.

In These Fevered Days, Martha Ackmann unravels the mysteries of Dickinson’s life through ten decisive episodes that distill her evolution as a poet. Ackmann follows Dickinson through her religious crisis while a student at Mount Holyoke, her startling decision to ask a famous editor for advice, her anguished letters to an unidentified “Master,” her exhilarating frenzy of composition, and her terror in confronting possible blindness. Together, these ten days provide new insights into Dickinson’s wildly original poetry and render a concise and vivid portrait of American literature’s most enigmatic figure. (Publisher)

Review: True confessions here. Even though I enjoy reading poetry I've never read much/any Dickinson before. When I heard about These Fevered Days I decided this was my way in and I was right. First Ackmann, a Dickinson scholar, was written a very readable and incredibly researched book about the poet. By highlighting ten pivotal moments in Emily Dickinson's life I was able to get a good grasp on what made her so special. Though Ackmann highlighted a few poems and included snippets from others I found myself wanting to read some more. So I picked up a Scholastic Classic collection of some of Emily Dickenson's poems at the library and find them easy to read and mostly easy to understand.

The last of the ten pivotal moments highlighted in These Fevered Days Ackmann titled "Called Back." The chapter is about the last years of Dickinson's life and I keep thinking about this chapter the most. When Emily closed in on the age of 50 many precious friends and family members died in rapid succession. At one point Dr. Holland, a family friend, placed one hand on Emily and the other on her sister and said, "The things that never can come back, are several." From that statement she wrote a poem (1514). Here is a snippet:

The Things that never can come back, are several —Childhood — some forms of Hope — the Dead —Though Joys — like Men — may sometimes make a Journey —And still abide —

As a person very aware of age, I was caught unprepared for how emotional I would feel about this thought but I certainly understand it. Indeed the things that never came back ARE several: childhood, fathers, past loves, pets, friends... At the end of her life Emily's last poem, sent to her nieces was simply:

Posted by Anne@HeadFullofBooks at 10:07 PM