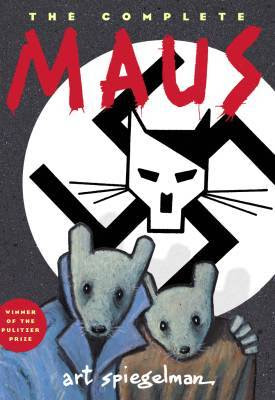 Back in January 2022 a school board in Tennessee voted to remove Maus from their 8th grade curriculum. It's removal started a firestorm of conservative individuals storming their school boards demanding that a lot of books should be banned, especially those that include anything about racism, sexuality, or LGBTQIA+ issues. Maus, at the head of the storm, is curiously devoid of all these issues yet individuals demanded it be removed from schools. I guess parents (who probably hadn't read the book) didn't want their children to learn about the Holocaust or have to learn anything, for that matter, that makes people feel bad about themselves or about history. According to some sources, the reason this school board banned Maus was because of its depiction of nudity. The exact complaint was: “concerns about profanity and an image of female nudity in its depiction of Polish Jews who survived the Holocaust.”.

In case you missed this 1991 book, Maus tells the story of Jews fleeing the Holocaust during World War II. Artist and writer Art Spiegelman creatively rendered the Jews in the story as mice and some of the Nazis as cats. Versions of Maus were serialized in 1981 before the entire story was collected in book form in 1991. Because of the hyperbolic technique of rendering characters as animals, the power of Maus is clear from one glance: For tweens and teens, this memoir of the Holocaust is potentially more powerful than a straightforward documentary. By heightening the depiction of people to anthropomorphized caricatures, the evil of the Nazis is unforgettable. (Fatherly)

So the nudity in the book depicts nude mice who are being gassed in concentration camps! And parents complained about that?

Maus is considered a graphic memoir. Art Spiegelman, the author and artist, collected the information from his father who survived the Holocaust. His mother also survived but later committed suicide. The horrors that happened to her and the death of her first born son just haunted her. Spiegelman found the process of creating the books (which were merged into one complete set in 1991) often very depressing. Maus I became quite popular and a movie was made from it. Spiegelman included himself in the book, since he is the reporter. His relationship with his father was difficult and this is reflected in the book also.
As the book banning of Maus was gaining steam among conservatives, a comic book store owner in Knoxville, Tennessee announced he would give away 100 free copies of Maus to any kid who wanted to learn about the Holocaust (10 News). And he successfully raised over $83,000 crowd funding to accomplish this task. I hope a lot of kids were able to get the book and actually read it!

A librarian friend, Sandy, contacted me and suggested that the best way to combat book banning is to actually buy the book(s) in questions or place them on hold at the library which signals the librarians that this is a valued resource. I took her advice and placed a hold on The Complete Maus at my local library. I was 89th in line. It took six months before it was my turn to read this impactful graphic memoir. Even though I had several copies in my high school library I'd never read the complete book before. Whew! It is a heavy one but also an important book which needs to be read widely.

What can you do to help prevent book banning and censorship? Here is a TIP sheet for students (which works for adults, too.)

Now go out there and place a hold on a few banned/challenged books at your public or school library.

Besides Maus, I recommend you start with these teen titles: