Review and quotes: THE IMMORTALISTS 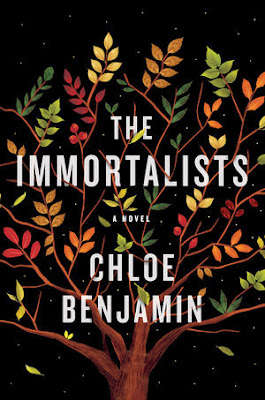 Title: The Immortalists by Chloe Benjamin

(1978-82) On June 25th, Simon goes to the Freedom Parade with the dancers from Purp. e didn't know that so many gay people existed in the country, let alone in one city, but there are two hundred and forty thousand of them, watching the kickoff by Dykes on Bikes and sheering as the first rainbow flag is hoisted into the air.

It's 1969 in New York City's Lower East Side, and word has spread of the arrival of a mystical woman, a traveling psychic who claims to be able to tell anyone the day they will die. The Gold children—four adolescents on the cusp of self-awareness—sneak out to hear their fortunes.

The prophecies inform their next five decades. Golden-boy Simon escapes to the West Coast, searching for love in '80s San Francisco; dreamy Klara becomes a Las Vegas magician, obsessed with blurring reality and fantasy; eldest son Daniel seeks security as an army doctor post-9/11; and bookish Varya throws herself into longevity research, where she tests the boundary between science and immortality. The Immortalists probes the line between destiny and choice, reality and illusion. It also explores the unrelenting pull of family bonds. (Publisher)

Review: My husband and I listened to the audiobook version of The Immortalists on a recent car trip. It is for an upcoming book club selection, otherwise I doubt I would have chosen to read it.

The book tells the story of how all four siblings are affected by the fortune teller's predictions as to their impending death-dates. Starting with Simon, the youngest, it appears that her predictions are correct, which causes all kinds of turmoil for each of the siblings. Along the way the reader learns about all the motivations and dreams each sibling has yet sees all the mistakes they make along the way, almost as if they are hypnotized by a prediction, knowledge they never should have had in the first place. As the siblings tell their stories, we see how each is drawn back to that date in 1969 and how their lives are all tangled up together.

My husband liked the book better than I did. He thought it was an interesting psychological experiment of how a predicted death date would play out in the lives of each of the characters. I was pretty frustrated by most of their choices and wanted to shake all of them at times. I guess you could say that the author accomplished her goal of creating a compelling story about life and death and family relationships...but did so with lots of bumps along the way.

I confess I'm a little worried about how the book club discussion will go. I promise to circle back and add a post script afterwards.

Posted by Anne@HeadFullofBooks at 10:10 PM