Review and quotes: THE SIXTH EXTINCTION 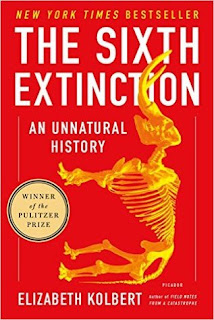 Title: The Sixth Extinction: An Unnatural History by Elizabeth Kolbert

Beginnings, it's said, are apt to be shadowy. So it is with this story, which starts with the emergence of a new species maybe two hundred thousand years ago. The species does not have a name--nothing does--but it has the capacity to name things.

Darwin's familiarity with human-caused extinction is clear from On the Origin of a Species. In one of the many passages where he heaped scorn on the catastrophists, he observed that animals become rare before they become extinct.

Summary: Scientists believe there has been five mass extinctions during the history of the planet Earth. Currently the sixth extinction is under way and it will be as catastrophic the one caused by an asteroid that slammed into the planet causing the extinction of all the dinosaurs. The sixth extinction is happening faster than one can imagine and will likely be the most lasting legacy of the humans who have caused it.

Review: I've wanted to read this book since it won the Pulitzer Prize for nonfiction in 2015. When it showed up as a book club library kit for check out, I selected it for my club over a year ago. Little did I know at the time that we would be embroiled in a catastrophic pandemic when it finally came our way. Club members discussed whether or not we should read it now. Would it be too deep and depressing for us to tackle? We decided to give it a try and I think everyone was glad that we did, though only three of the nine gals actually read the whole book.

The first five chapters or so are pretty dense, looking at evidence of extinctions going back millions of years and talking about creatures that we've never even heard of before. But as the author started talking about the evidence of this, the sixth extinction, the book became easier to read and almost un-put-downable. What is happening to amphibians, bats, rhinos, and to coral reefs is so frightening. If we don't get a handle on climate change, and fast, our ocean will become unlivable due to the acidification of it. It was a real call to action. Though very depressing at the core, it also has some points of hope, showing how many people are working on solutions to reverse the course we are on and how we can help.

It is maybe not the book one should recommend for people to read right now in the midst of our pandemic lock-downs. Or maybe, and this is what I think, it is the perfect book to read when one has time to ponder ways they can change their own lives for the better, to help reduce their own carbon footprint. Either way, add it to your reading list. It is a must read for sometime in your life, the sooner, the better. After you read it,  watch the David Attenborough's 2020 documentary called "Life on this Planet" available right now on Netflix. It is a powerful video on the same topic by the famed naturalist who says the film is his witness statement and hope for the future.

Book Club discussion questions: (I didn't find any questions from the publisher. So I grabbed a copy of the questions assigned to tenth grade readers by their Biology teacher in some school. We all decided that questions directed at 10th graders was about the right level for us.)